Who's Running for State Office in Wisconsin 2012: 85th Assembly District 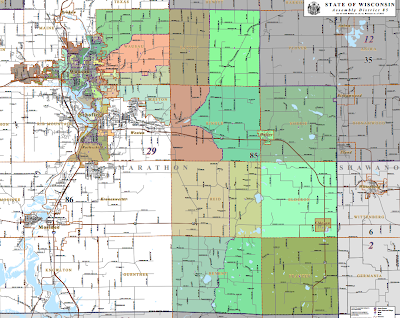 Donna Seidel, the current representative in the 85th District, lost to Jerry Petrowski in the 29th State Senate District recall election on June 5, 2012. 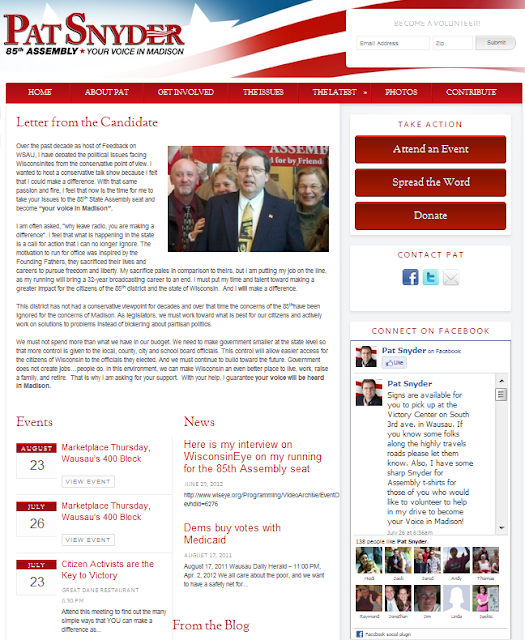 About:  [with bold added]  Patrick James Snyder was born October 10th, 1956 to Ray and Joan Snyder in Boone, Iowa. His father worked for the Chicago Northwestern Railroad and was transferred to Milwaukee, WI when Pat was 4 years old. Pat grew up in Milwaukee attending Mother of Good Counsel grade school on the city’s northwest side.

After freshman year in high school his father received a promotion and was transferred to Oelwein, IA where Pat graduated from high school in 1974. Pat attended the University of Iowa and earned a Bachelors of Arts degree in broadcast communications. Pat met his wife Shawn while attending Iowa. She received a BSN in Nursing from the University of Iowa in 1979. They were married June 7th, 1980.

Pat’s first job in radio was at KDLS in Perry, Iowa in 1979, with jobs at stations in Marshalltown, IA, Kewanee, IL, and Ottumwa, Iowa. Pat and Shawn welcomed their daughter Amy on February 6th, 1985 and then their son Daniel on April 19th, 1987.

In 1995 Pat was recruited by the President of Indian Hills Community College as the Public Information Director. Besides handling press releases, college catalogs and marketing, Pat was given the task of creating a radio sports network for the college purchasing the airtime, producing the games for broadcast and raising the funds to cover expenses and with the remaining profit going toward athletic scholarships.

In November of 2000 Pat applied for a radio talk host position at WSAU in Wausau. It was a chance to return to the Badger state and work in the radio medium he always sought. Over the last eleven years, he hosted and produced one of the most popular talk shows in central Wisconsin, interviewing news makers on the local, state and national level. One highlight included a two week trip to Iraq. While there he spent time with area troops and broadcasted live back to Wausau. 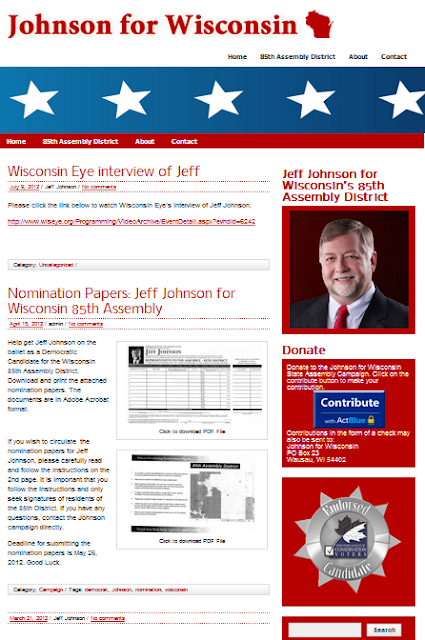 About:  [with bold added] Jeff Johnson comes from a unique background. While currently serving as Marathon County Democratic Chair, Johnson spent most of his life as a supporter of Republicans. In fact, he voted Republican up until the year 2000. He switched because the Republican Party became consumed by representing large corporations rather than individual middle class Americans.

[RG:  Just to be perfectly clear about his voting record, I suggest revising the second sentence to read, "Prior to serving as Marathon County Democratic Chair....."?]

A lifelong Wisconsinite (born in 1959 in Superior), Johnson attended Catholic and public schools in the Fox Valley where he graduated from Lourdes High School in Oshkosh. He attended UW-Oshkosh for several years before deciding instead to serve his country in the U.S. Air Force. He served in Germany for three years.

After an honorable discharge from the Air Force, Johnson married his wife Jane. They have been together for 27 years and have two sons. Johnson bartended for a stint after the military and was later hired as a correctional officer before being promoted to being a probation and parole agent. He has been a Wausau resident for nearly two decades and retired in 2011. 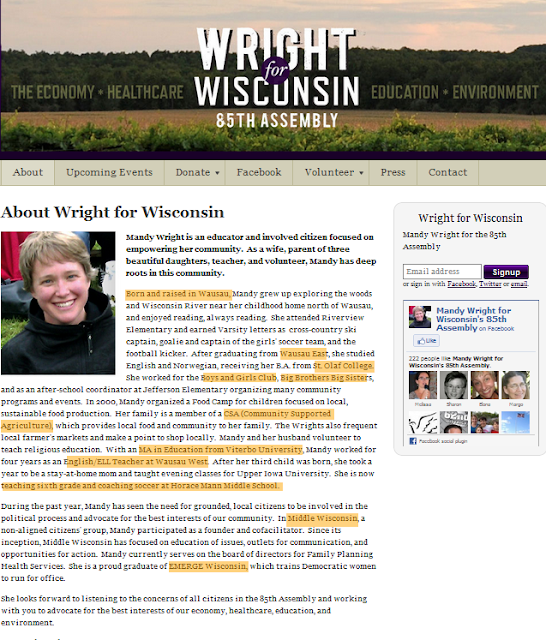 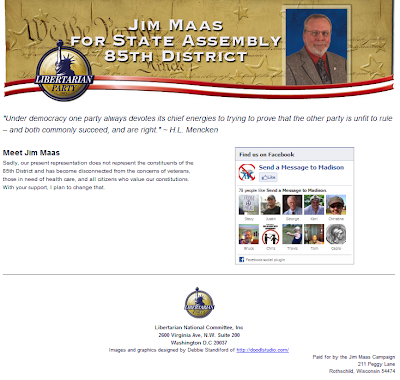 About.  [with bold added] Jim was born and raised in Portage and now lives in Rothschild with his wife, Mary Beth. He has two sons and one sweet grand-daughter.

Jim earned degrees from UW-Stevens Point and UW-Stout and worked in public school districts and the UW-SP Library, before retiring in December.

Jim served in the US Army Infantry in Vietnam as well as in the Wisconsin National Guard and the US Naval Reserve (SeaBees). Jim is an active member of community and state organizations, including VFW Post 388, AMVETS Post 3929, Elk's Lodge 248, AMVETS Riders, Veterans for Peace, Wisconsin Gun Owners, Libertarian Party of Wisconsin, and the First Universalist Unitarian Church.

He enjoys boating and motorcycle riding in the summer and community activities through his memberships year 'round. The Maas family roots in Marathon County go back a century to when Jim's grandfather and family immigrated from Germany.