Who's Running for State Office in Wisconsin 2012: 71st Assembly District 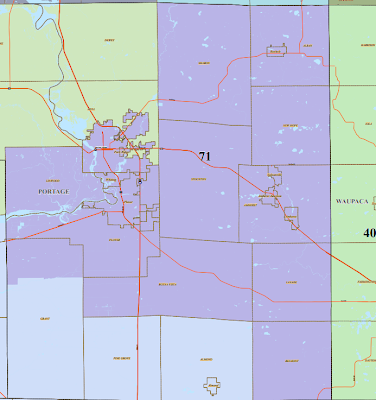 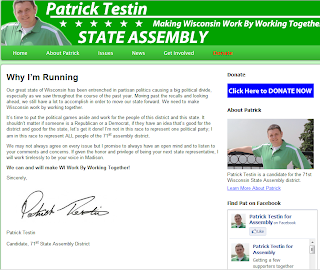 About:  [selected, with bold added] Patrick was born in Madison, WI to proud parents Matt and Paula. He was raised in Marinette, WI where he graduated from Marinette High School in 2006. Patrick then attended the University of Wisconsin – Stevens Point where he earned a Bachelor of Science degree in political science in May of 2011.

Prior to graduation, Patrick has worked a number of different jobs, ranging from busing tables, working in lumber yards and factories back in Marinette, and serving as a volunteer football coach for the Crivitz High School football team. In 2008 Patrick became politically involved and volunteered for the McCain-Palin presidential campaign. Patrick then became a member of the Portage County Republican Party where he served on the executive board as Chairman of the UWSP College Republicans.

Patrick also served on the UWSP Student Government Association as a Student Senator where he took on a leading role in passing a number of reform packages that benefited the university and the students. Patrick is a proven leader, as is evident by the numerous awards he received throughout his college career. He was awarded the Student Government Association Senator of the Year award for two consecutive years, as well as the Student Senate Service Award for his service to the university.

Patrick served as deputy field director on Congressman Sean Duffy’s 2010 campaign, heading five of twenty counties. During the summer of 2011, Patrick served as the field director for the Kim Simac for State Senate campaign leading the grassroots efforts. Following his experiences on campaigns, Patrick decided to try his hand at business and is currently operating and managing a store in Plover called Mattress Firm.
Wisconsin Eye interview 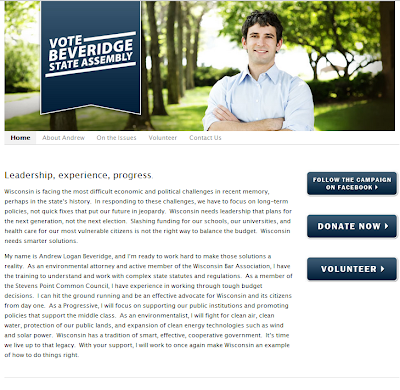 About:   [selected, with bold added]  I graduated from SPASH as co-valedictorian of the Class of 2000. I went on to study at the University of Wisconsin-Madison and graduated in 2004 with the B.S. in Philosophy and a 3.92 GPA. Following college, I returned to Stevens Point and worked for several years before enrolling at Lewis & Clark Law School in 2007.  I was selected as Best Oral Advocate in the First Year Moot Court Competition for my argument on a Clean Water Act issue. I completed environmental advocacy internships with WaterWatch of Oregon, the Pacific Environmental Advocacy Center, and the Environmental Protection Unit of the Wisconsin Department of Justice. After receiving my Juris Doctorate from Lewis & Clark in December of 2009, I returned to Stevens Point. I passed the Wisconsin Bar Exam in February of 2010.

I strongly believe in public service and our shared responsibility for building a better community. In December 2010, I began volunteering with Portage County Legal Aid. I provide free legal services to clients in divorce and child custody cases who would otherwise not be able to afford an attorney.

I also serve my community as a member of the Stevens Point Common Council.  I won a tightly contested 3-way race in the First District and have served the citizens of Sevens Point since April of 2011. Recently, I was appointed Chairman of the Finance Committee and appointed to the Community Development Board of Commissioners and the Board of Public Works. My service on the Council has provided first-hand experience with difficult budget decisions and the pressures of providing high-quality services despite declining resources. 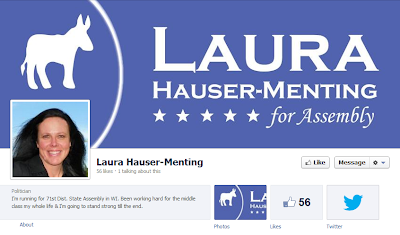 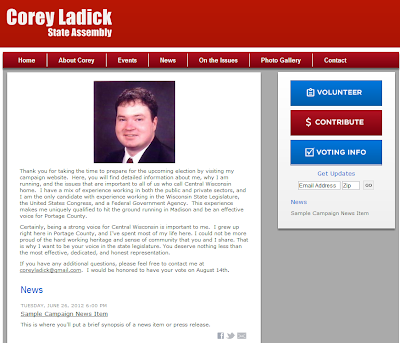 About: [with bold added] I am currently a branch manager at a local community bank. I have a Master’s degree in business administration with a specialization in finance, and a Bachelor’s degree in public administration and political science with an emphasis in health policy. In addition to four years of local banking experience, I have also completed a graduate level internship at the Export Import Bank of the United States, a federal government agency dedicated to creating American jobs through export financing and promoting American products abroad. Other experience includes a year of teaching English at a South Korean high school, which was the most challenging but also the most rewarding job that I have ever had.

I am also no stranger to the legislative process, and have served as a congressional intern to Congressman Ron Kind in Washington DC. I was also a legislative assistant to Senator Julie Lassa. My initial interest in politics started in high school when I became an advocate for diabetes research funding.

I am an active member of the Rotary Club of Greater Portage County, a past 1st vice chair of the Portage County Democratic Party, and I have also been involved in Junior Achievement, teaching students about careers and managing money. I have also served on the campaign cabinet for the United Way of Portage County. 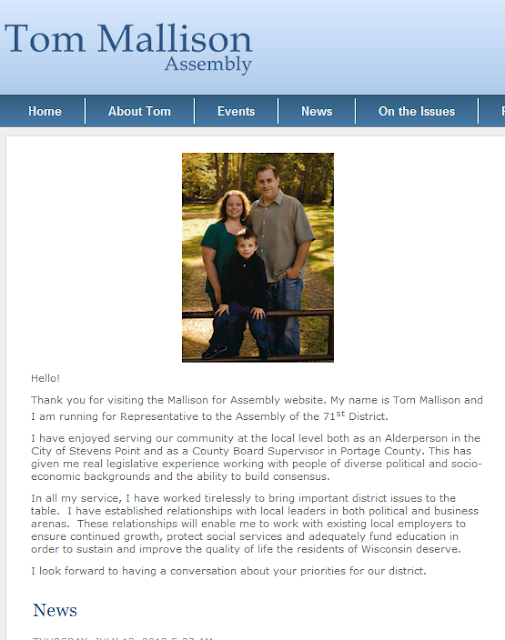 About:   [selected, with bold added]  Tom is a lifelong resident of the 71st district. Tom was born and raised in Stevens Point, Wisconsin, and he still lives there with his wife Laura, who works at Sentry Insurance, and their son Owen, who currently attends Madison Elementary.

Tom has a diverse work background that started in retail management for Shopko. Tom then worked for Midwest Airlines, and most recently worked for Joerns Healthcare, where he served as a delegate to the Central Labor Council.  Tom's political experience started shortly after joining the Portage County Democratic Party, where he served on the executive board and then as a Vice-Chair. He has run many local campaigns throughout the years, and encouraged many concerned citizens to serve our community at a local level.

Tom is currently serving his third term on the Portage County Board of Supervisors, where he chairs the Portage County Housing Authority. He also is the Vice-Chair of the Human Resource and Space and Property Committees.  [H]e is a former Alderperson for the City of Stevens Point where he served on the Finance Committee and the Board of Public Works.

In 2011 he was recognized as an emerging leader by the Stevens Point Journal. 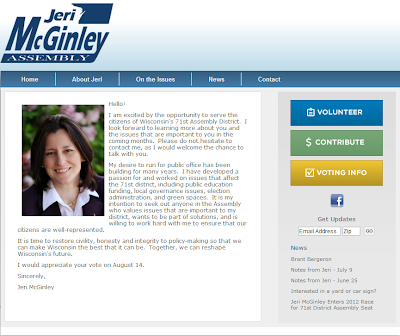 Prior to moving to the district, Jeri worked in the private and nonprofit sectors. Jeri worked as a bank manager and as an accounting manager for a small business in Ann Arbor, Michigan. After moving to Baraboo in 1994, Jeri served as an officer on the boards of the Baraboo Area United Way and the Sauk County Humane Society. 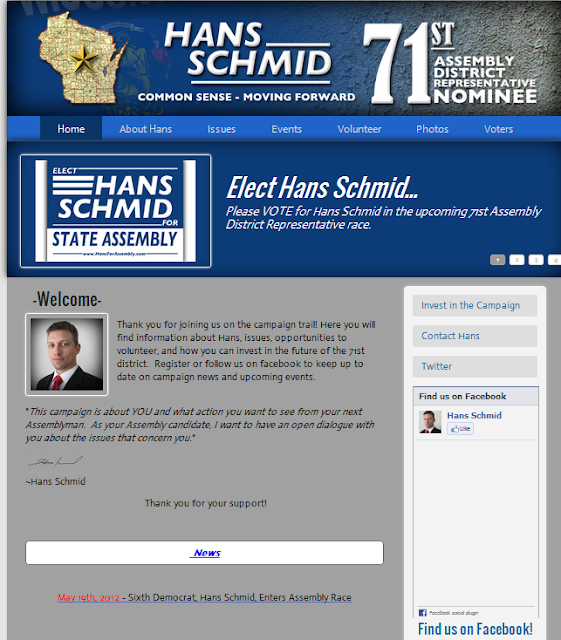 About: [with bold added] I was born and raised here in Central Wisconsin, attended high school in Almond-Bancroft, and graduated from the University of Wisconsin-Stevens Point with a bachelor of science degree in Biochemistry. After high school graduation, I enlisted in the United States Army for eight years where I led soldiers as a Sergeant and served my country during Operation Iraqi Freedom. While I was attending the University of Wisconsin-Stevens Point I was deeply involved in the Student Government. Currently, I am employed for a non-profit community-based corrections program helping troubled community members as a case manager. My life's work is in public service and I want to continue serving our community as your next Assemblyman. 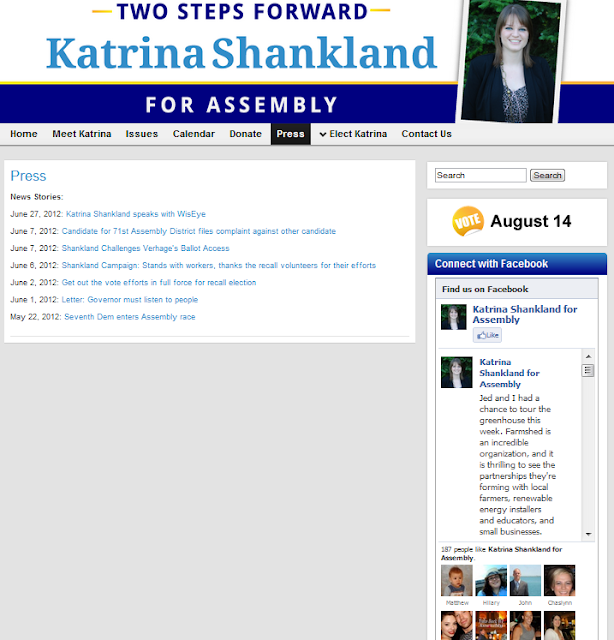 About: [selected, with bold added]   Originally from Wittenberg, a small town about 35 miles from Stevens Point, Katrina grew up in a humble household of teachers who quickly taught her the importance of life-long education. She graduated from Wittenberg-Birnamwood High School and attended the University of Wisconsin – Madison, where she earned a degree in political science.

She has interned for Governor Jim Doyle, the Marathon County Courthouse, and the Burleigh Street Community Development Corporation. She also served for four years as a counselor at Badger Girls State and assisted a former teacher’s campaign for Assembly. From directing an international nonprofit based out of D.C. to serving as a volunteer English teacher in rural Mexico, she has experience in the nonprofit sector, especially in program management, budgeting, and making tough decisions.

Inspired by the grassroots effort to recall and replace Governor Walker, Katrina felt compelled to lead, and left her job at the MREA to work double-time on the recall campaign as a Field Organizer for the Democratic Party of Wisconsin.

David Verhage
Came up empty-handed even when doing a Stevens Point Journal search.