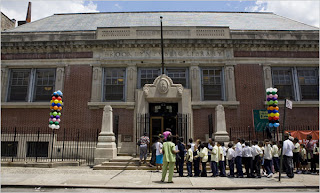 Photo by Kelly Shimoda for the New York Times
Link to June 20 New York Times article.
Excerpt:
The Macon branch of the Brooklyn Public Library, one of 18 Brooklyn libraries that opened between 1901 and 1923 through the support of the steel magnate Andrew Carnegie, reopened on Thursday after a two-year, $2 million renovation.

The library, a two-story, neoclassical building at 361 Lewis Avenue with fireplaces, oak paneling, alcoves and wooden benches, opened on July 15, 1907, in a ceremony that drew about 2,000 visitors, according to the library’s records. The Macon branch provided nearly continuous service over the past century to Bedford-Stuyvesant.
The library had been renovated twice in the past: 1947-48 and 1973-77. The latest renovation includes an African-American Heritage Center, an area for infants and preschoolers, and self-check service.
Related websites.
History of Andrew Carnegie and Carnegie Libraries
Carnegie Libraries in Wisconsin by our very own Library History Buff Larry Nix.
The Library History Buff takes a look at the oldest of Wisconsin's 63 Carnegie libraries.
Brooklyn (NY) Public Library's homepage.
Posted by Retiring Guy at 7:29 AM No comments:

Has Annalee Ever Seen the Inside of a Public Library Lately? 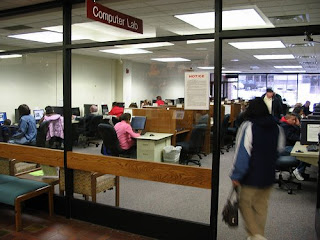 Naperville (IL) Public Library
Link to June 20 AlterNet post, "Myths About the Internet That Refuse to Die", by Annalee Newitz.
The myths the author hopes will soon be put to rest.
1. The Internet is free.
2. The Internet knows no boundaries.
3. The Internet is full of danger.
She loses points with the following statement: You can get a few free minutes online in your local public library, maybe, [my emphasis] and set up a Web site using a free service (if the library's filtering software allows that). But will you be able to catch anyone's attention if you publish under those constraints?
"A few free minutes"?
Just the other day, we received a written comment from "Anonymous", who accused us of being "naive" to let people "essentially use your computers all day." The question that immediately leapt into my mind: How do you know who's hangin' out at the library all day?
(The Middleton Public Library limits computer use to 30 minutes only when our 27 public-access stations are in use. We also provide 4 laptops to check out for in-library use. Two years of sampling have consistently shown us that the average time spent at a computer is 35 minutes. And the impact on "bumping" is minimal.)
Posted by Retiring Guy at 6:35 PM 2 comments: 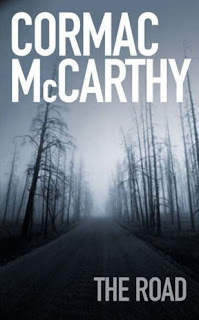 Excerpt: Topping the list of the 100 best books are Cormac McCarthy’s The Road, J.K. Rowling’s Harry Potter and the Goblet of Fire, Toni Morrison’s Beloved, Mary Karr’s The Liars’ Club and Philip Roth’s American Pastoral. The list features a few less obvious choices, too, including The Giver by Lois Lowry, Jimmy Corrigan by Chris Ware and The Predators’ Ball by Connie Bruck.

Other lists featured in EW's 1,000th issue, at newsstands today, trumpet other genres of "new classics", including best movies, TV shows, and music albums. Sure to be tempest-in-a-teapot controversial!
At a glance, it looks as though only the best movies list is available online. According to PW, you'll have to wait until the first week of July to access the best books list.
Posted by Retiring Guy at 1:05 PM No comments:

Social Networks and the Digital Divide

Excerpt:
Social networks like Facebook and MySpace have reputations as time-sucking procrastination tools, but a new study from the University of Minnesota says au contraire.

(Be sure to read the variable comments.)

Link to University of Minnesota 6/19 news release about the study.

Watch a video about the study and a full interview with the lead researcher.
Posted by Retiring Guy at 11:12 AM No comments:

In the News: Milwaukee Public Library 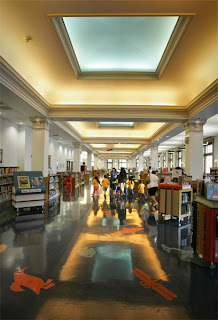 The author-illustrator of many books had just returned from a long trip to Peru and was surprised to learn that the architect of a new public library room wanted her animal artwork to roam the floor.
Related sites:
Reading is Fundamental: Introducing Illustrators.
Lois Ehlert on Library Thing.
An international, more comprehensive (i.e., non-library) overview of kids' spaces.
Posted by Retiring Guy at 9:04 AM No comments:

Not a Pretty (Economic) Picture for States

Excerpt:
The budget year that begins July 1 will be one of the bleakest for state governments in the last three decades, according to a report [66-page document] released Thursday (June 19).

...the survey confirmed the depth of the weakening in state finances. General fund spending, which finances the day-to-day cost of operating government, is projected to rise 1 percent in fiscal 2009, compared to 6.7 percent in an average year. This is the third-lowest spending increase in the last 31 years...

Posted by Retiring Guy at 3:26 PM No comments: 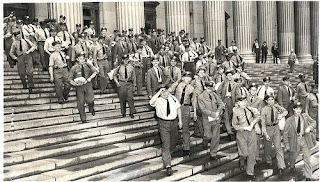 OK, so it's not the most exciting stuff in the world.
Posted by Retiring Guy at 3:10 PM No comments:

And we end up looking even better as a result.

Excerpt: Bringing patient records into the computer age, experts say, is crucial to improving care, reducing errors and containing costs in the American health care system. The slow adoption of the technology is mainly economic. Most doctors in private practice, especially those in small practices, lack the financial incentive to invest in computerized records.

In 1986, the Middleton Public Library was a member of a (Geac) library automation consortium that went by the name of SCROLL (South Central Online Libraries). The group included – what was at the time – the largest public libraries in the South Central Library System: Madison, Dane County Library System, Middleton, Sun Prairie, Monona, Stoughton, Oregon, Verona, Monroe, Baraboo, Reedsburg, and Portage.

This consortium, renamed LINK (Library Interchange Network) when it migrated to a Dynix system in 1994, now boasts 41 members. The majority of the new members represent small libraries in communities of less than 4,000 population.

Why can’t regional, state, and national medical associations work together to provide the necessary kind of support system that libraries have developed?
Posted by Retiring Guy at 8:21 AM No comments: 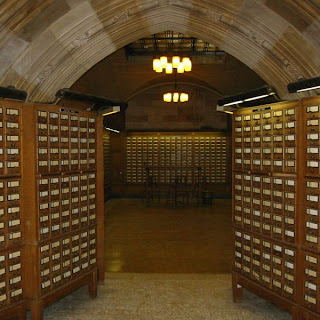 Excerpt: In 1934, [one of technology’s lost pioneers Paul] Otlet sketched out plans for a global network of computers (or “electric telescopes,” as he called them) that would allow people to search and browse through millions of interlinked documents, images, audio and video files. He described how people would use the devices to send messages to one another, share files and even congregate in online social networks. He called the whole thing a “réseau,” which might be translated as “network” — or arguably, “web.”
And be sure to check out the Mundaneum graphic that accompanies the article, "Index Cards and Electric Telescopes".
Link to 3/30/2008 post, "House of Cards", at Paul Collins' Weekend Stubble blog. Collin is the author of "Histories: When the Internet was Made of Paper", published in the March 22, 2008 issue of New Scientist. (Subscription required.)
(Another benefit of blogging. It provides the "genealogy" for articles that appear in the mainstream, popular media.)
Related reading.
The Library History Buff Larry Nix's "Evolution of the Card Catalog" essay.
Posted by Retiring Guy at 10:31 AM No comments:

Basic findings:
1. Generates $41.2 million in spending and income
2. Responsible for 785 full- and part-time jobs.
3. 4% of income and 4% of jobs in Douglas County are tied to UW-Superior.

Related information.
Link to "The Economic Contribution of Wisconsin Public Libraries to the Economy of Wisconsin".
Posted by Retiring Guy at 8:16 AM No comments:

Pew Research Report on Using the Internet for Political Information

Excerpt:
The 2008 election campaign has sparked unprecedented interest within the electorate. Throughout the spring, surveys by the Pew Research Center for The People & The Press have found that roughly one-third of Americans have been following news about the primary campaign very closely -- a level of interest not usually reached until the peak of election season. Within this context, large numbers of Americans are not only going online to learn about the campaigns, but are also taking an active role in promoting online conversations about politics as well as spreading news and information about their candidate of choice or the race in general.

In total, 46% of all adults are using the internet, email or phone text messaging for political purposes in this election. This percentage includes those who are doing at least one of the three major activities we probed -- getting news and information about the campaign, using email to discuss campaign-related matters, or using phone texting for the same purpose.

40% of all Americans (internet users and non-users alike) have gotten news and information about this year's campaign via the internet.

19% of Americans go online once a week or more to do something related to the campaign, and 6% go online to engage politically on a daily basis.

23% of Americans say they receive emails urging them to support a candidate or discuss the campaign once a week or more.

10% of Americans use email to contribute to the political debate with a similar frequency.

Full report available here.
Posted by Retiring Guy at 9:54 AM No comments:

Excerpt:
The modified policy states that "any adult resident within the school attendance area, any parent with children in the school or any employee assigned to the school may raise an objection" to materials used in the educational program or housed in the library collection, but the challenge must begin at the building level.

New language also specifies that the building procedure for handling a challenge applies only to materials within that building.

According to the article, the suggested policy change is not the result of any recent challenges in the Appleton Area School District, but rather a response to a book challenge in the Menasha School District, and its subsequent media coverage, that occurred this past spring.

Related articles:
"Menasha school board rejects removal of hip-hop book", Appleton Post-Crescent, May 23, 2008.
Reactions to the Menasha challenge from The Appleton Blog.
Posted by Retiring Guy at 9:29 AM No comments: