Covidiot Chronicle: The University of Dayton is an Ohio coronavirus hot spot 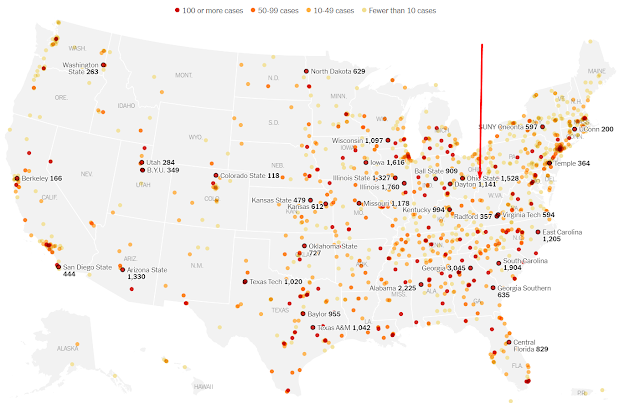 At the University of Dayton in Ohio, President Eric Spina said the school of 8,500 undergraduates launched an aggressive testing and tracing program after a meeting of students with too few masks caused a cluster of cases, followed by another outbreak in dense student housing on the campus periphery.

“We were caught off guard when cases started going from a few a day to 30 a day,” Mr. Spina said. A blitz of tests soon uncovered 100 cases a day, mostly asymptomatic. Only two students had to be hospitalized, and both have recovered. 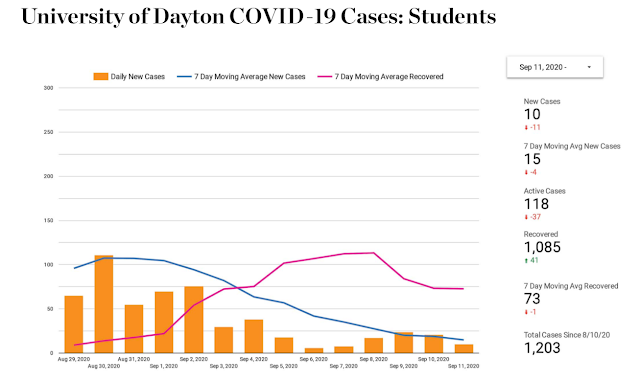 
In-person classes have been “very carefully designed” to allow for physical distancing, he said. Face coverings are required everywhere, including classrooms, and students and staff have been trained in safety measures, including cleaning and disinfecting between classes, Spina said.

University leaders will continue to evaluate the COVID-19 case trends, and expect to announce next week if additional classes will move to in-person instruction, officials said.

Posted by Retiring Guy at 3:19 PM No comments:

Covidiot Chronicle: Lancaster County, home to the University of Nebraska, is a coronavirus hot spot 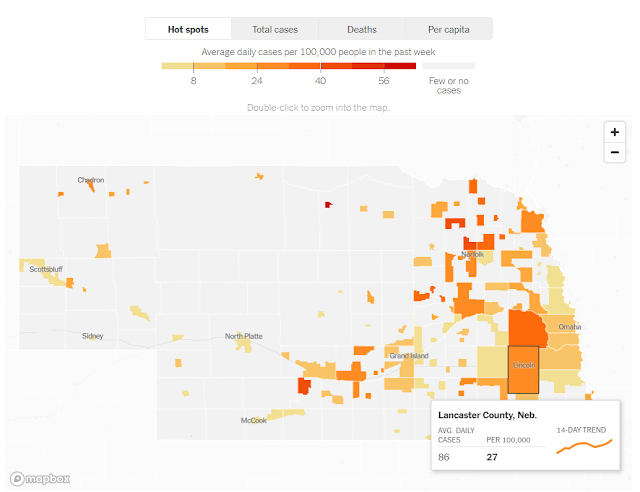 The county’s COVID-19 risk dial remained squarely at the center of the high-risk level after a second record-breaking week of coronavirus cases.

As of Friday afternoon, Lancaster County had recorded 498 new cases this week, up from last week’s high of 476.

And many of them can be attributed to college students and, more recently, prison inmates, Pat Lopez, director of the Lincoln-Lancaster County Health Department, said at an afternoon news conference. 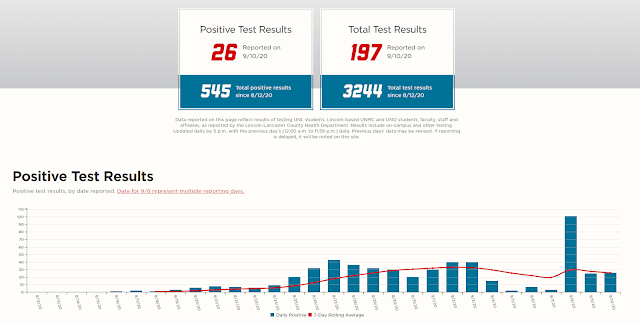 WIsconsin 2020 elections: Who's running in the 51st State Assembly District? 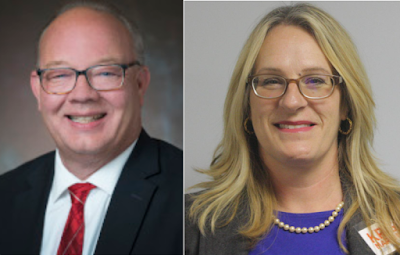 In November 2018, Todd Novak (R-Dodgeville) wins a 3rd term in the Assembly by a narrow margin of 1.4 percentage points.r

Democratic challenger Kriss Marion has an impressive resume of public service.  She is currently a member of the Lafayette County Board of Supervisors, a Southwest Wisconsin Planning Commissioner, and active in numerous local and state organizations. 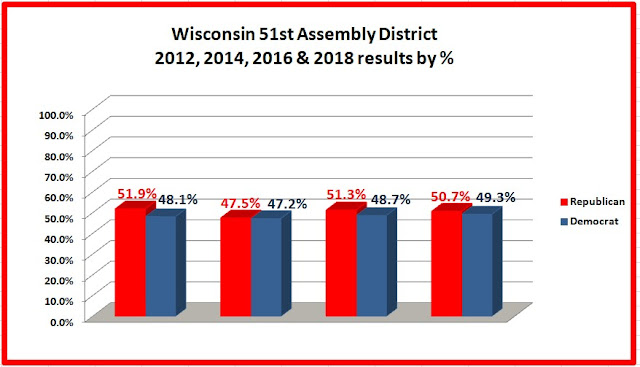 The Lumpy L Art
of the WIGOP Gerrymander 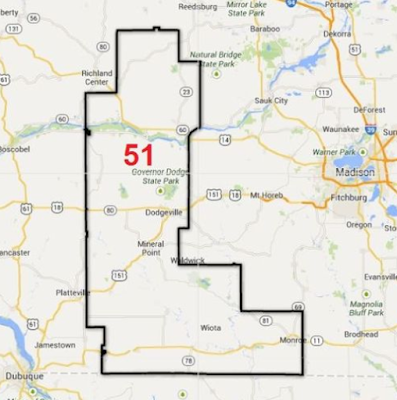 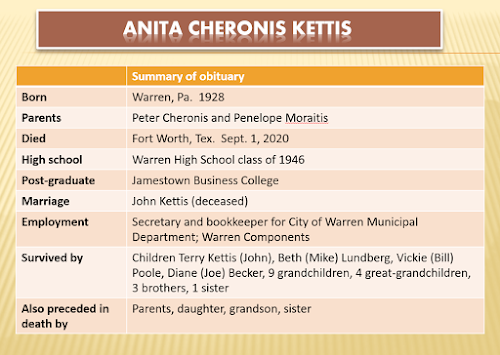 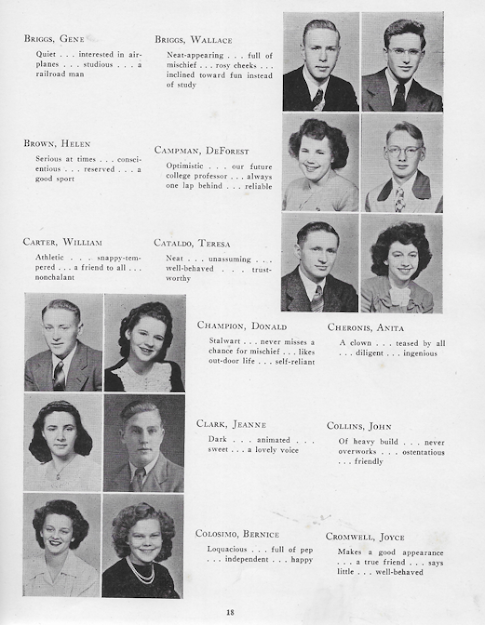 The popularity of Anita as a baby name is graphed here.  Let's take a look at Penelope. 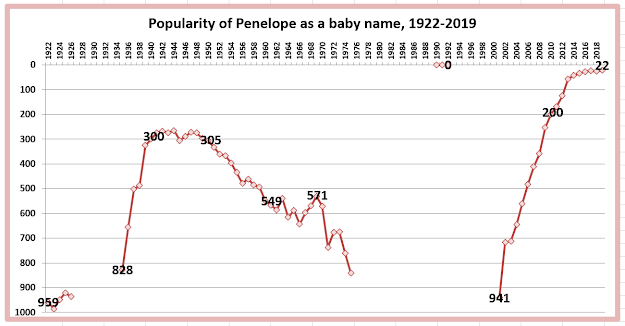 Penelope debuted in 1922 but dropped off the chart after a few years of nothing doing.  She reappeared in 1935 and rocketed to middling fame, spending about a decade in the top 300 before fading.  Her second reappearance has been much more successful.  She is currently at her highest level of popularity ever.


That's why Retiring Guy found the 'ideology' crosstabs the most instructive compared to all of the rest of polling breakdowns.  Are there really 160% more conservatives than liberals in the state of Wisconsin?  Is this an accurate reflection of the current electorate?

Jo Jorgenson is the Libertarian candidate for president.

A lot has happened since the last Marquette Law School Poll — weeks of civil unrest in response to a police shooting in Kenosha, two political conventions and visits by presidential candidates — but the latest poll finds views in Wisconsin remain virtually unchanged.


In addition, Republicans are disappointed to learn that their campaign of fear-mongering didn't put a dent in support for Black Lives Matter.

Posted by Retiring Guy at 8:59 AM No comments: 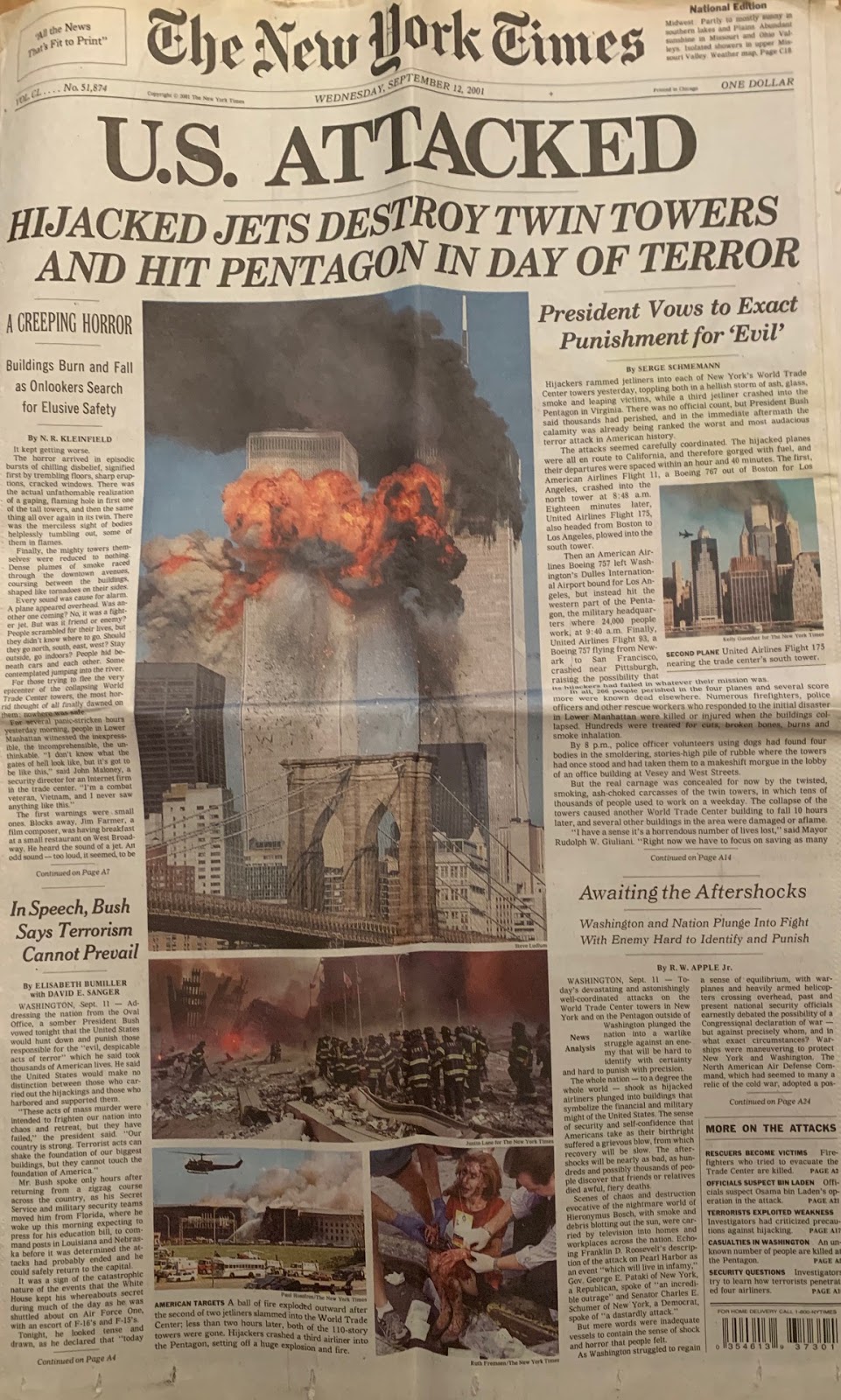 “This must be the worse day in American history,” Eddie said after we watched about 30 minutes of television coverage of the terrorist attacks.

When he returned home from school, I asked him how much he knew about what happened.

“A plane crashed into the World Trade Tower,” he replied.

“Two planes,” I corrected. “One crashed into each tower.”

That news came as a big surprise to him. He also knew about the plane that hit the Pentagon but was unaware about the one that crashed in Pennsylvania.

was home from 3:00 until 4:30. The TV was on the entire time. I switched among CNN, Fox, NBC,CBS, and ABC to see if I could detect any differences among the networks’ coverage. Predictably, the news anchors at the determinedly conservative Fox network seemed the most eager to assign blame for this tragedy, but, surprisingly, none of their guests swallowed the bait. Earlier in the day, I had been tempted to tune into Rush Limbaugh’s radio show. I’m sure he was frothing at the mouth and pinning the entire series of events on Bill, Hillary, and Chelsea Clinton.

“This is really sad,” Eddie lamented as I was getting ready to return to work.

“You can watch something else if you want,” I suggested.

The Disney and cartoon channels were running their usual programming, purposefully oblivious to the day’s devastating events. I felt he needed a temporary break from reality. (Later in the week, most non-news cable channels ran occasional banners or showed a frozen screen expressing statements of sympathy.)

I walked to the other side of the house, as I felt the need to rub my face with a cluster of cotton balls dampened with a squirt of Sea Breeze. When I returned to the family room to announce my departure, I noticed that Eddie quickly changed the channel, as if he was watching a forbidden program. Like everyone else, I think he had quickly become addicted to the day’s news nonstop coverage of “America Under Attack”, as CNN has dubbed it.

Andy had called from Matt’s house around 4:15. Football practice, as well as all other after-school activities had been canceled for the day. (Actually, the boys’ football practices were held as scheduled, as the Suburban Youth Football League has no direct affiliation with the Middleton school district. Andy said only 7 members of his team showed up.)

“I’m doing my homework,” he offered. Then he made a comment about the terrorist attack. I thought I detected a catch in his voice.

“I’ll talk about it with Mom when she gets home,” he said.
Posted by Retiring Guy at 8:44 PM No comments: 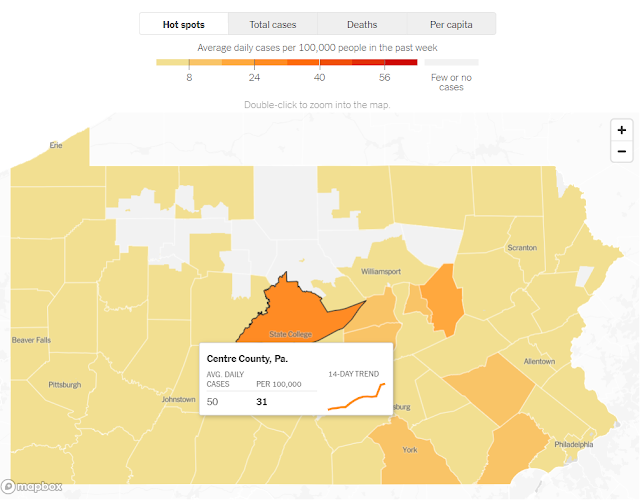 Centre County added 137 cases of the new coronavirus Friday, according to the state Health Department, the second-highest number reported in a single-day since the beginning of the pandemic.

The county has reported 576 cases of COVID-19 in September, more than in March, April, May, June, July and August combined. About 54% of the county’s total cases, 1,062, have been reported in September.

Nearly all of the new cases were reported in State College ZIP codes. All but two test results reported Friday were confirmed. 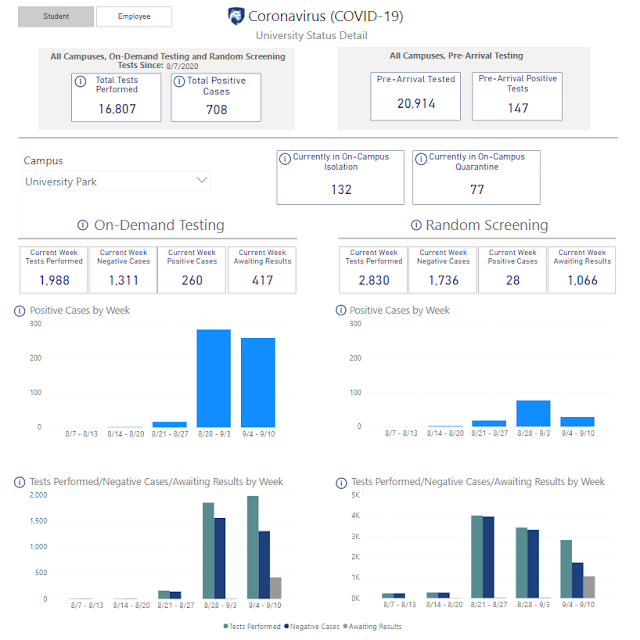 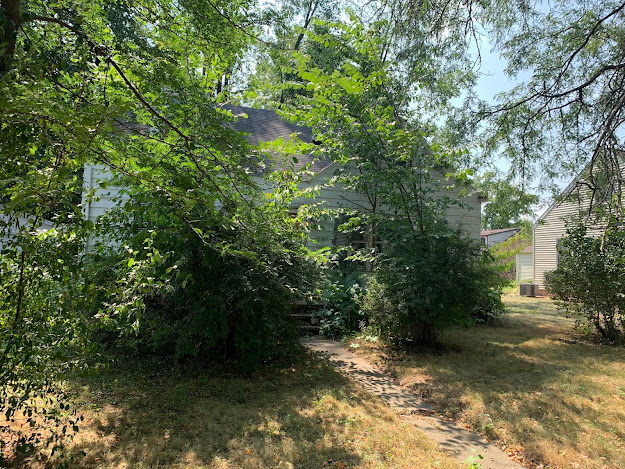 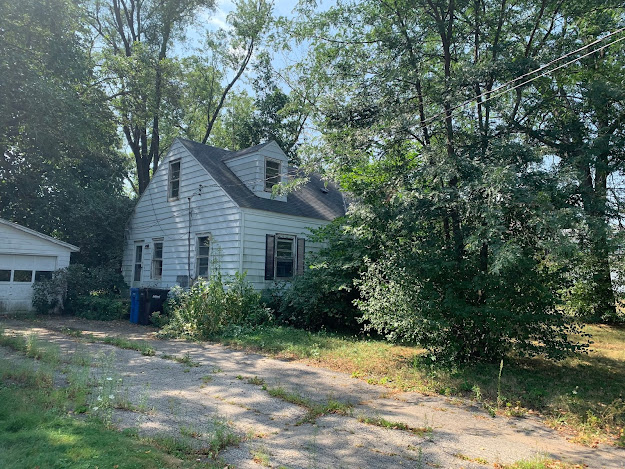 Posted by Retiring Guy at 5:11 PM No comments:

Covidiot Chronicle: Clarke County, home to the University of Georgia, is a coronavirus hot spot 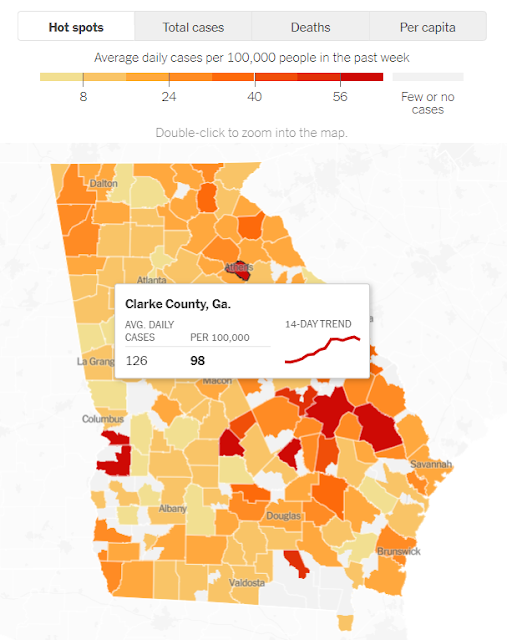 
COVID-19 surged again at the University of Georgia in the second full week of fall semester classes.

Some 1,417 members of the UGA community reported testing positive for COVID-19 through the university’s mandatory “DawgCheck” reporting system. Almost all of them — 1,402 — were students; 14 were staff and one a faculty member.

UGA’s surging numbers have helped make Clarke County one of the nation’s hot spots for COVID-19. As of Tuesday, only one county in the state was adding new COVID-19 cases at a faster rate than Clarke, according to a New York Times COVID tracking website.

The positivity rate for voluntary testing that UGA is conducting at Legion Field also jumped again to just over 8%. 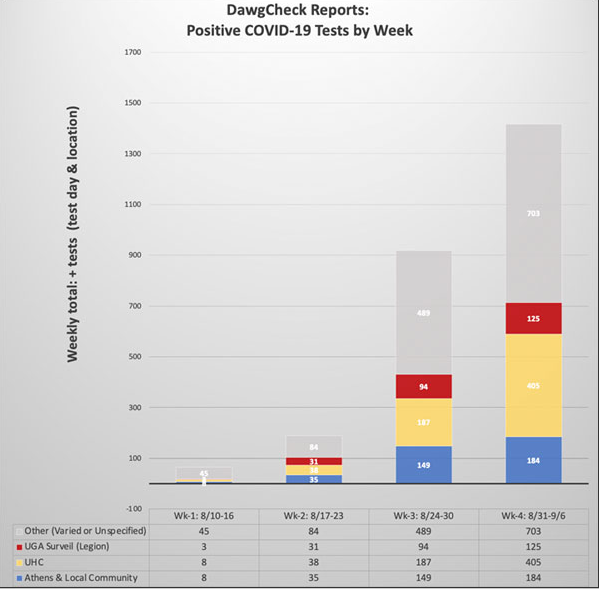 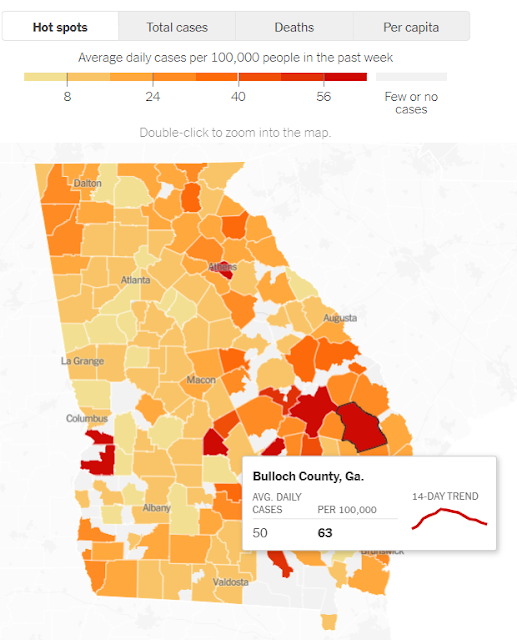 In Georgia, Matthew Boedy, a professor of rhetoric at the University of North Georgia, has started tracking cases statewide because the local university system hadn’t organized them all in one place.

His work has found Georgia Southern University in Statesboro is one of the frontrunners, with 942 reported cases since August 17. Yet according to the university’s dashboard on Thursday afternoon, it had 126 confirmed cases and tracked another 237 self-reported cases from August 31 to Sept. 6. The county surrounding it has seen 1,222 cases per 100,000 residents in the past two weeks. 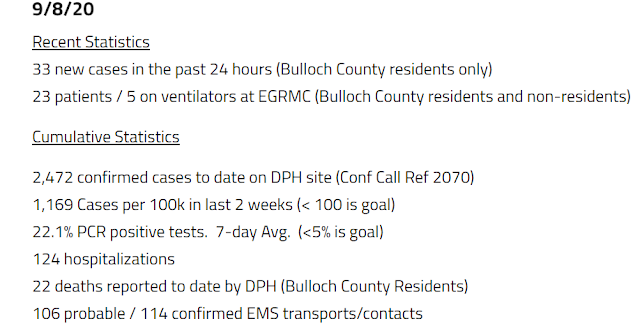 
The list includes seven starters, among them running back Wesley Kennedy III, who led the Eagles with 824 rushing yards and 1,199 all-purpose yards in 2019, and safety Kenderick Duncan. A team spokesman said the list includes players missing the game for COVID-19 issues, injuries, suspensions or coach's discretion. 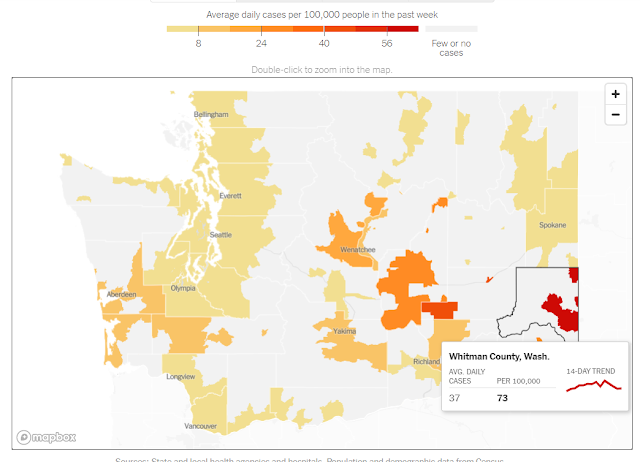 Even counties where the local college skipped most in-person instruction, like Washington State University in Whitman County, are still susceptible to climbing case counts. That locality had roughly 70 cases per 100,000 residents in two weeks in late July, and now is reporting 1,295 in the last two weeks.

What’s driving that increase, according to Troy Henderson, the county public health director? “About 12,000 young adults pulled into a very small rural town."


What to expect?  Not any statistical information. 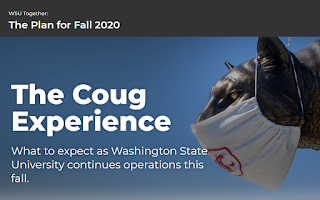 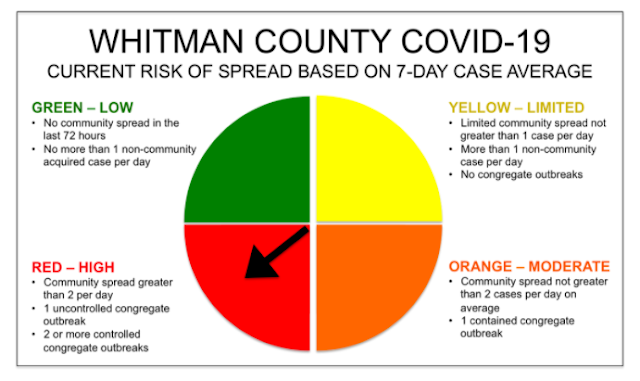 Posted by Retiring Guy at 8:23 AM No comments: 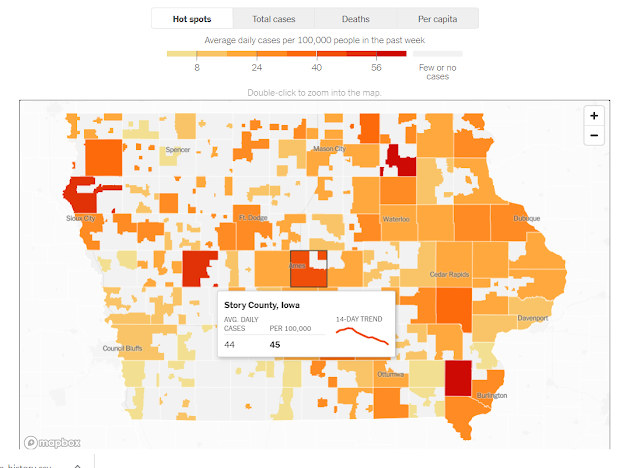 In Story County, Iowa, home to Iowa State and one of the country's hottest outbreaks, a rise in cases among people 45 years and older shows the hotspot is spreading from campus, said Dr. John Paschen, the chair of the county’s health board.

“What I'm really afraid of is we're going to have another episode where it gets into a nursing home and a lot of people die," Paschen said.

College administrators fail the test of transparency with weekly updates of on-campus testing.  Iowa State gets an 'F'. 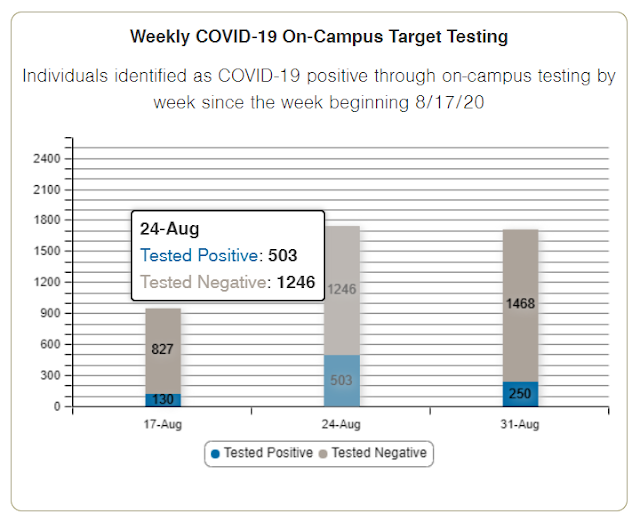 Iowa State University COVID-19 (above and below)_

Apparently, Iowa counties are restricted from providing any statistical information about COVID-19.

Click on the link indicated by orange arrow and you are returned to the back where the above screenshot is found. 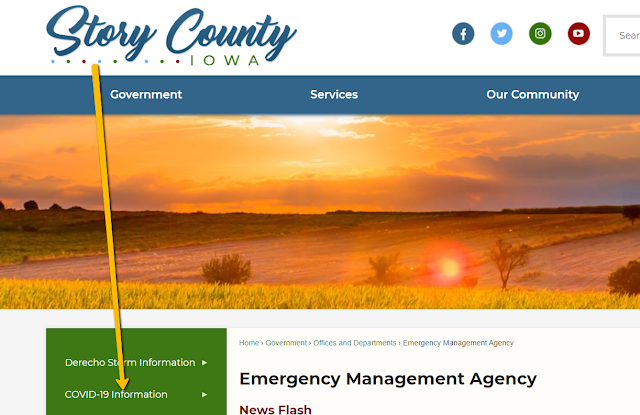