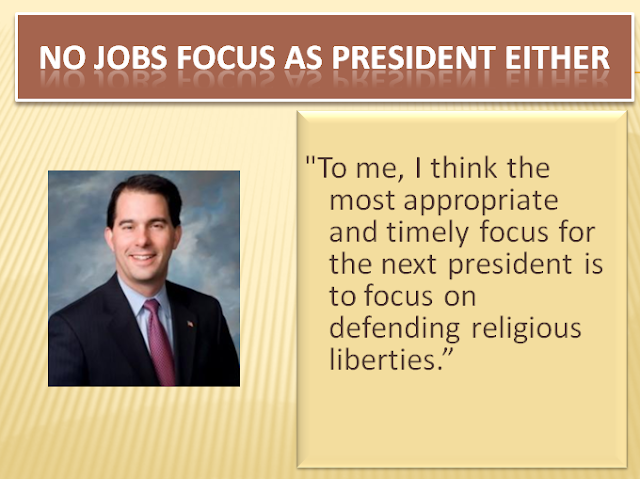 As quoted in Scott Walker: Constitutional amendment on gay marriage is not a top priority.  (Washington Post, 7/31/2015)


Prohibits the federal government from taking discriminatory action against a person on the basis that such person believes or acts in accordance with a religious belief or moral conviction that: (1) marriage is or should be recognized as the union of one man and one woman, or (2) sexual relations are properly reserved to such a marriage.


In other words, it legalizes discrimination against same-sex couples.


Amends the federal judicial code to deny federal courts jurisdiction to hear or decide any question pertaining to the interpretation, or the validity under the Constitution, of: (1) any type of marriage, (2) the provision of the Defense of Marriage Act declaring that no state shall be required to give effect to any marriage between persons of the same sex under the laws of any other state, or (3) this Act.

Posted by Retiring Guy at 5:54 PM No comments:


Diane Hendricks, who owns Beloit-based ABC Supply, also gave $5 million. Together, the Ricketts’ and Hendricks’ contributions account for half of the $20 million raised by Unintimidated PAC in its first quarter in existence — a haul that put Walker’s super PAC in the top tier among Republican presidential contenders.


Just in case you missed it the other day.


Here's a 'fluffed-up' version of the video I shared the other day.

Posted by Retiring Guy at 3:08 PM No comments:


In a previous post, I noted that annual circulation of physical units at Wisconsin's public libraries has decreased 12% since its peak (record) year of 65,608,341 in 2009.

And there are a number of reasons why this decline is taking place.

Ebooks have changed how books are produced, marketed, and read, although the many predictions of print's demise are certainly off the mark.

The Internet has changed how content is delivered and advertising budgets are determined, which has has had a huge negative impact on newsstand circulation of magazines.   Not to mention newspaper subscriptions.  (Although this household remains committed to print.)

Streaming of music now accounts for more revenue than sales of physical units.  (I can't remember that last time I purchased a music CD.  My main source of music is Spotify.)  As for movies, Netflix counts 65,000,000 streaming members vs. 5,300,000 DVD subscribers.

What about the facts that Wisconsin public library print collections are shrinking and less money is available for the purchase of materials?

Caveat:  Wondering about the impact of this statement on page 9 of the Wisconsin public library annual report instructions for 2014.  "Serial back files in print" are no longer reported. 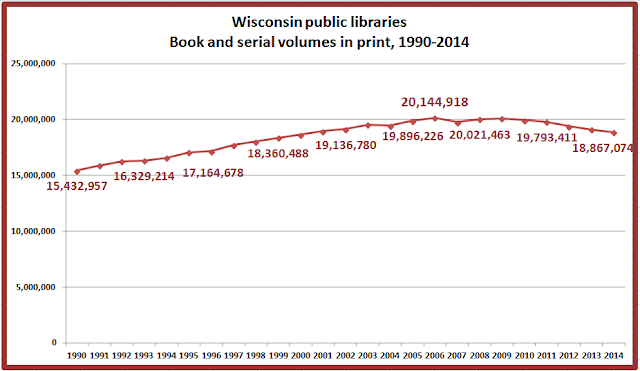 The number of book and serial volumes added peaked at 1,562,327 in 2008.  Six years later, according to the preliminary figures, volumes added declined by nearly 20%, a drop of 301,652.  That translates into few items on the new book shelves, which was always a significant generator of circulation in the public libraries where I worked. 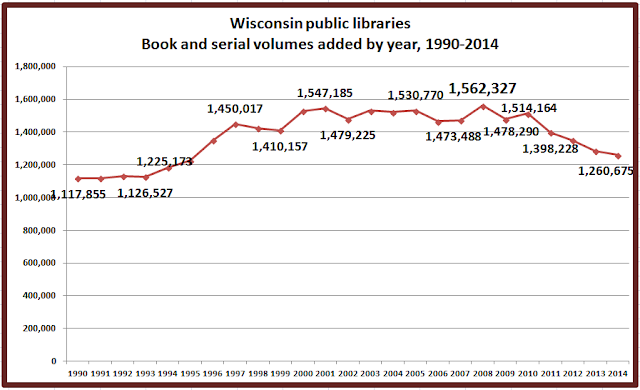 Perhaps it all comes down to money.

The total amount expended by Wisconsin public libraries for print materials peaked in 2009.  The 2014 preliminary dollar figure reflects a 8.6% decline in buying power.  (Inflation is not taken into consideration here.) 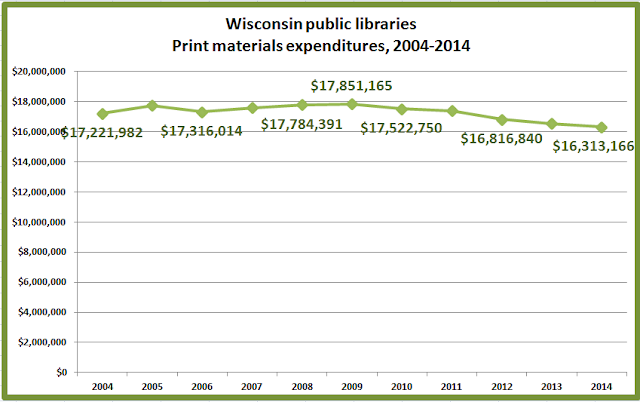 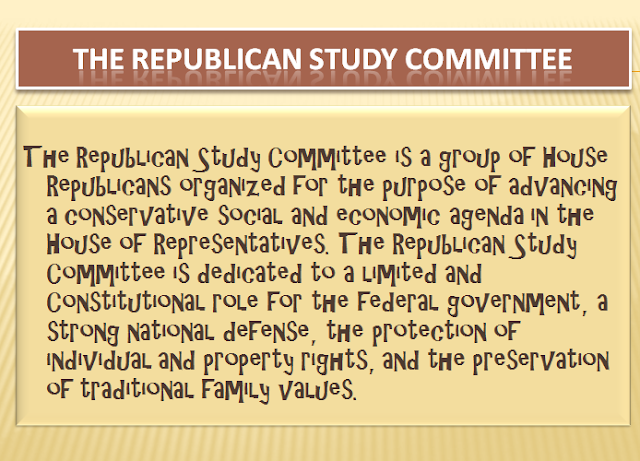 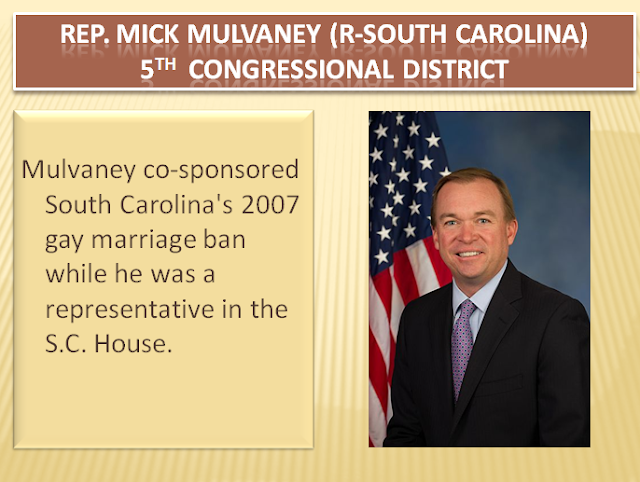 Mulvaney was re-elected to the House with 60.6% of the vote.


Posted by Retiring Guy at 9:08 AM No comments: 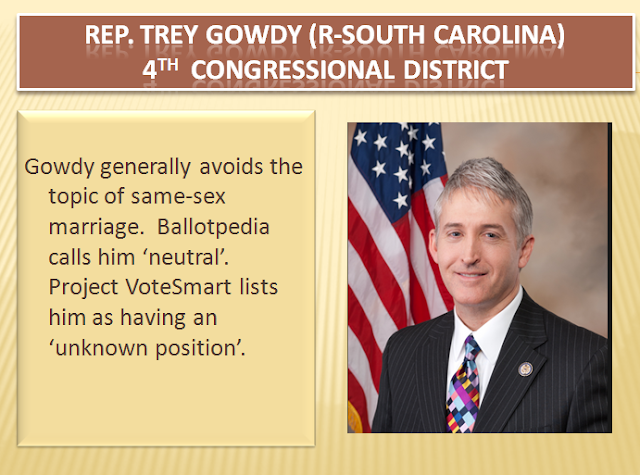 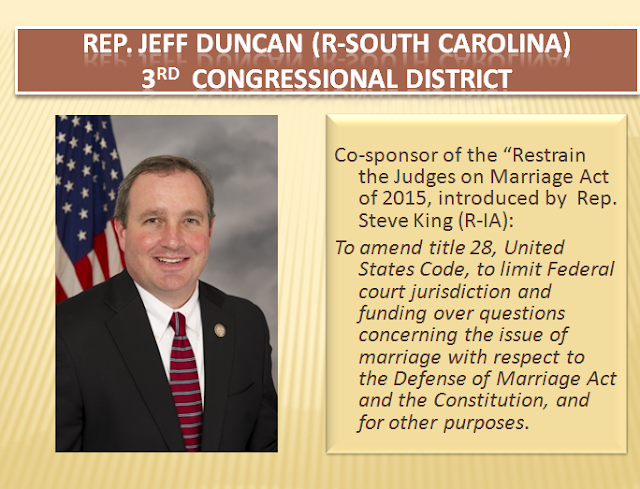 As found at Time To Checkmate Federal Courts On Same-Sex Marriage And More.  (Western Journalism, 6/24/2015)


Posted by Retiring Guy at 7:23 AM No comments: