Expanding into space previously occupied by the UPS Store and Sue's Hallmark.  UPS moved two doors down, and Hallmark relocated in Fitchburg. 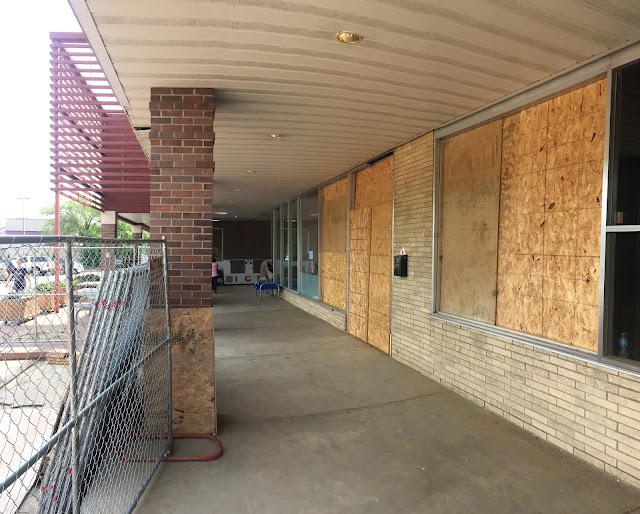 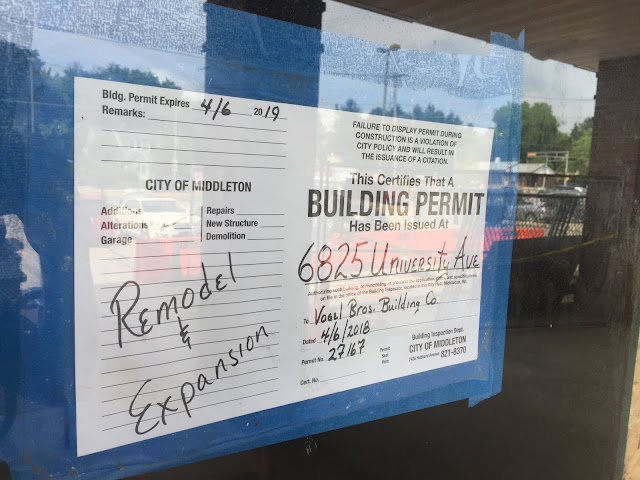 
The approval comes almost a year after the co-op opened its third location, in the 20,000-square-foot former Pierce's Market store in the Northside Town Center, 2817 N. Sherman Ave. The co-op, founded in 1974, completed a $4 million renovation of its Williamson Street store in 2014 and spent $3.5 million to open its Middleton store in 2010. 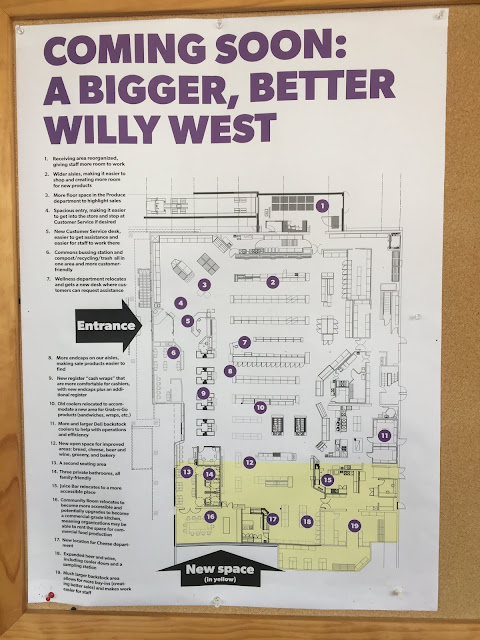 Posted by Retiring Guy at 3:15 PM No comments: 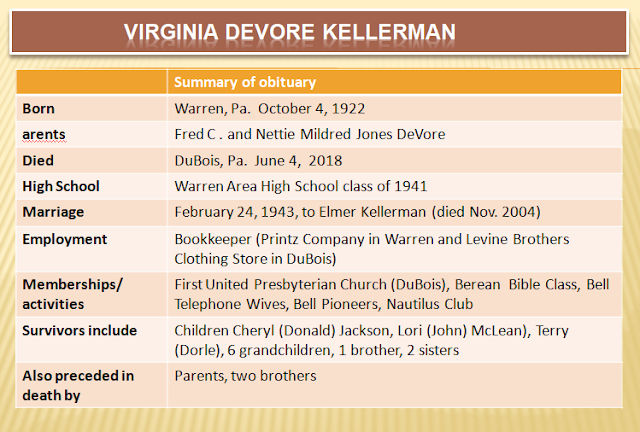 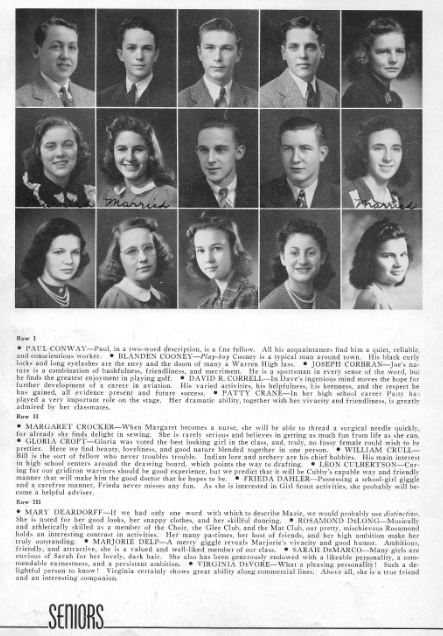 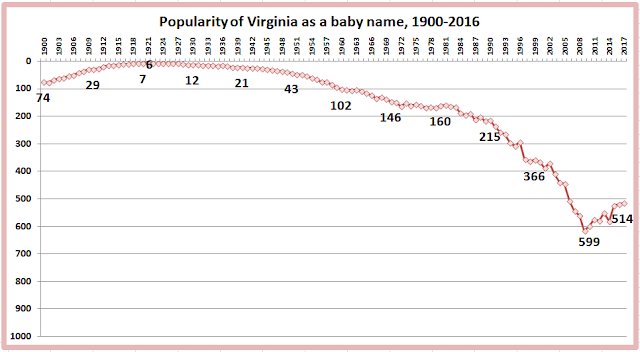 Posted by Retiring Guy at 12:49 PM No comments:

Climate change as a matter of fact: May 2018 record heat in U.S. 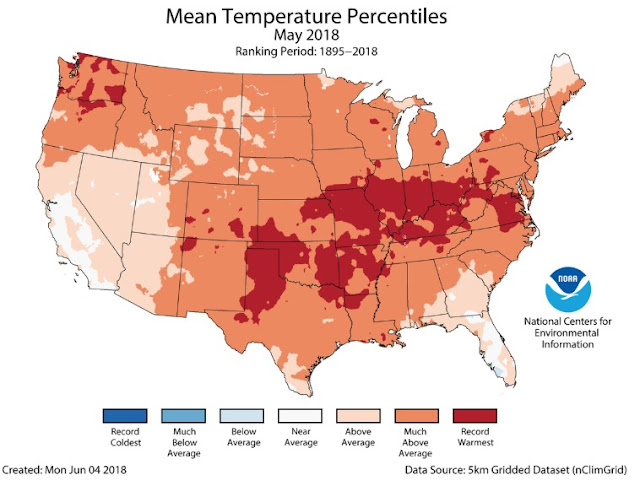 Contiguous U.S. had its warmest May on record.  (National Oceanic and Atmospheric Administration, 6/6/2018)


The average May temperature across the contiguous U.S. was 65.4 degrees F, 5.2 degrees above average, making it the warmest May in the 124-year record, according to scientists at NOAA’s National Centers for Environmental Information. This surpassed the previous record of 64.7°F set in 1934, during the dust bowl era. There were more than 8,590 daily warm station records broken, or tied, in May. 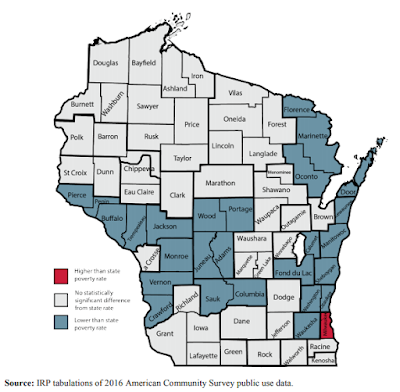 
We also examined poverty rates across regions in the state, revealing deep poverty in Milwaukee County and especially in the central city of Milwaukee. But the report also signaled a strong recovery in most parts of Wisconsin with more substate areas (26 counties) having lower poverty rates than in most previous reports. There are larger regional differences in poverty within Wisconsin than in earlier years, with the recovery especially helping the eastern parts of the state, the counties north and west of Milwaukee, as well as the west central region of the state.

Of Wisconsin's approximately 382,500 African-Americans residents, 62% reside in the City of Milwaukee.

Related reading
The Unelectable Whiteness of Scott Walker.   A journey through the poisonous, racially divided world that produced a Republican star.  (The New Republic, 6/15/2014)

Posted by Retiring Guy at 9:13 AM No comments: 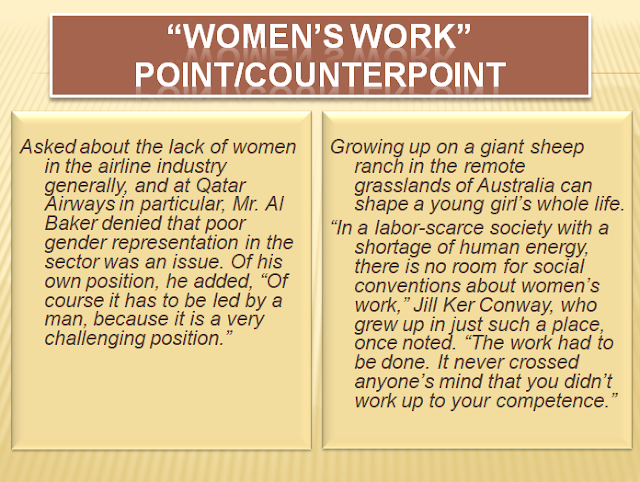 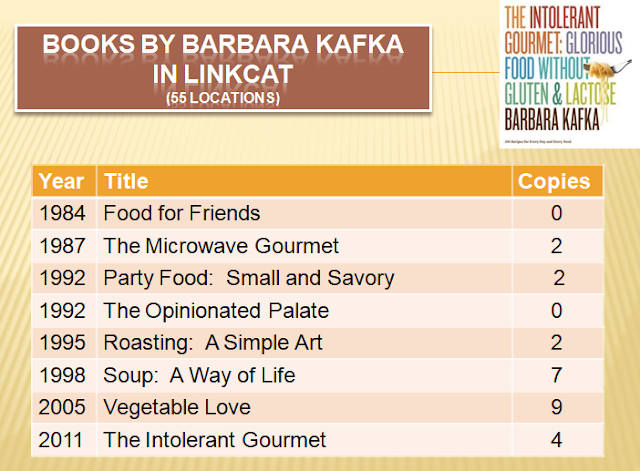 
Ms. Kafka would crown her career with two Lifetime Achievement Awards and the Cookbook Hall of Fame Award from the James Beard Foundation. But she was hardly destined to develop into a culinary virtuoso. Yes, as a child of well-to-do parents, she was exposed to haute cuisine when she dined at fancy restaurants, or when the family cook replicated her favorite recipes by famous chefs.

But when Ms. Kafka graduated from college, she wanted to be a poet, or to write about art. She was allergic to gluten and was lactose intolerant. She couldn’t boil an egg.


From a 22.6 percentage point deficit in 2016 to a 19.4 percentage victory margin in this week's special election


Republicans have lost the first election in Missouri since Eric Greitens resigned the governor’s post in disgrace, with Democrat Lauren Arthur picking up a state senate seat in the Kansas City suburbs.

With 100 percent of precincts reporting, Arthur had defeated Republican Kevin Corlew — a fellow state legislator — by 19 points. That represented a sizable swing toward Democrats in the 17th district, which backed both Donald Trump and Mitt Romney by 4 points. 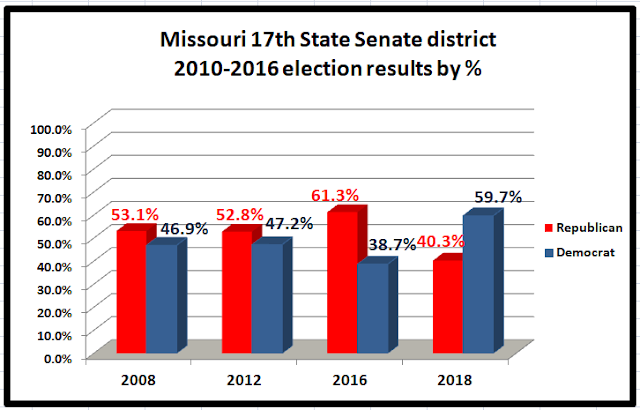 Posted by Retiring Guy at 8:19 AM No comments: 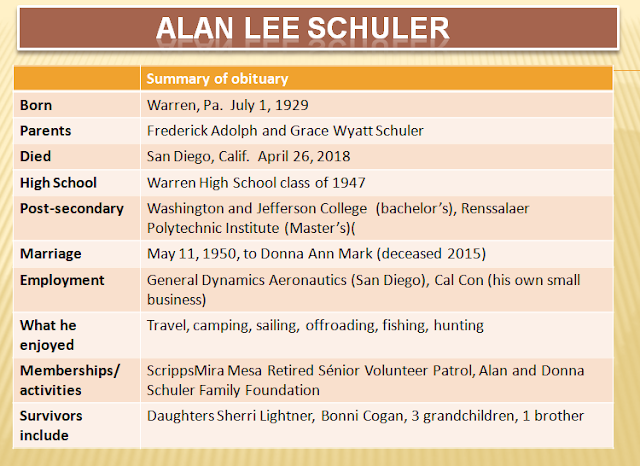 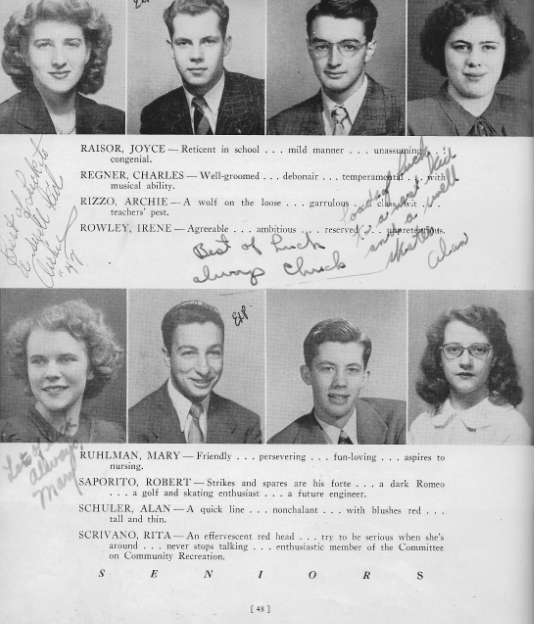 Alan -- slightly more popular at its peak than its counterpart 'Allen' -- peaked at #40 in 1951, during the decade of its greatest popularity. 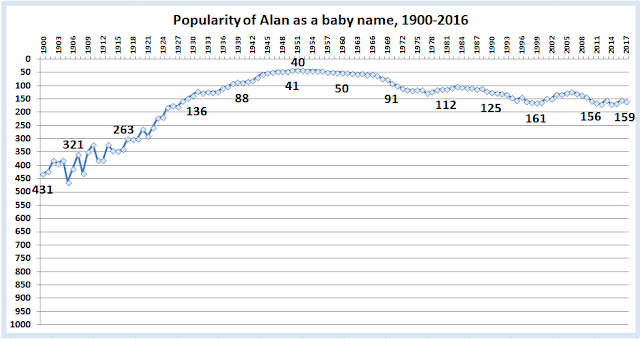 Posted by Retiring Guy at 7:35 AM No comments: 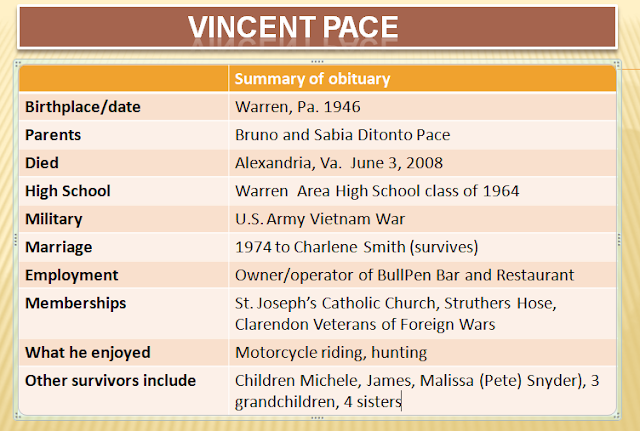 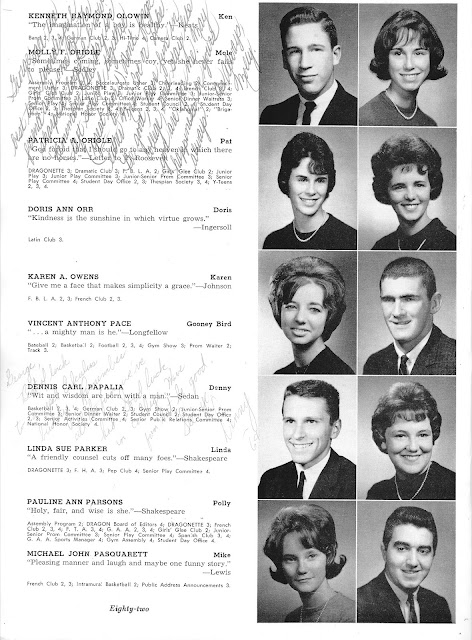 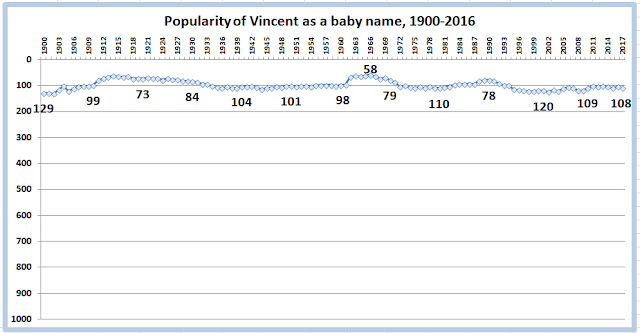 Posted by Retiring Guy at 8:39 PM No comments: 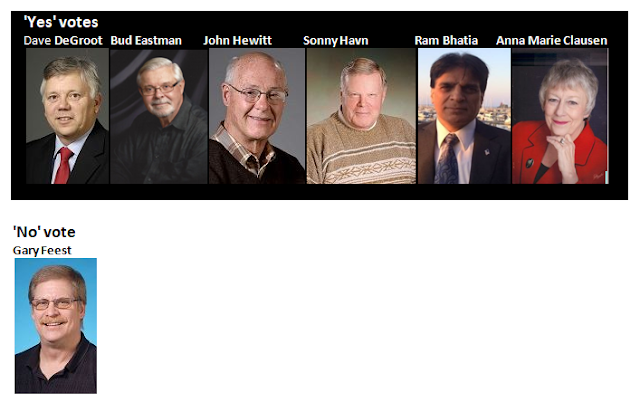 
Wisconsin state statues define a “blighted area” as including “an area which is predominantly open and which because of obsolete platting, diversity of ownership, deterioration of structures or of site improvements, or otherwise, substantially impairs or arrests the sound growth of community.”

When it comes to pay to play denials, Mick Mulvaney's pants are on fire 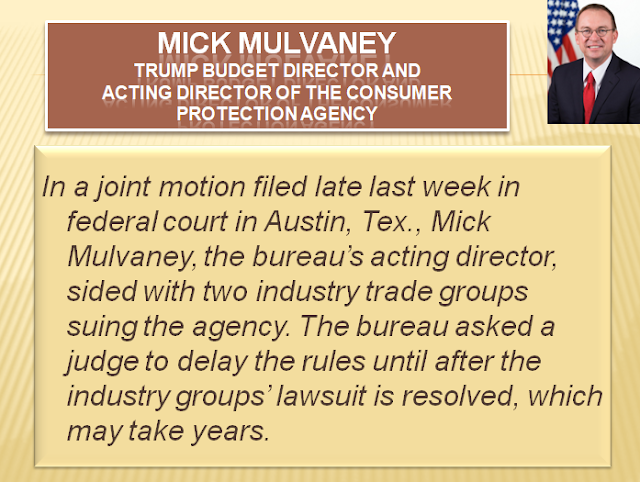 Dear Scott Walker, It’s called the Wisconsin Idea, what you once tried to sandbag 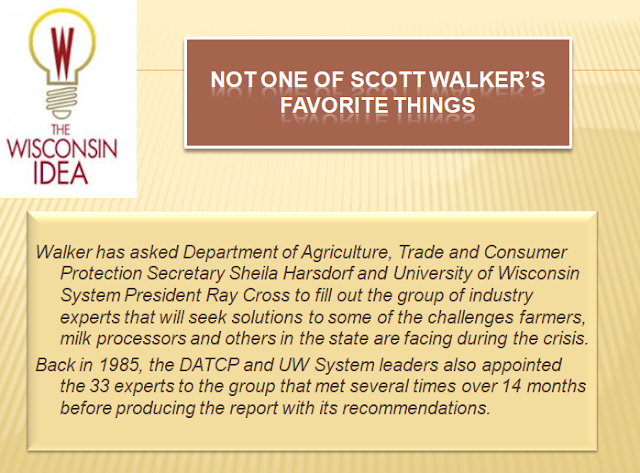 Posted by Retiring Guy at 10:01 AM No comments:

Define 'indignity': Being denied goods and services by business owners who don't like who you are or what you represent 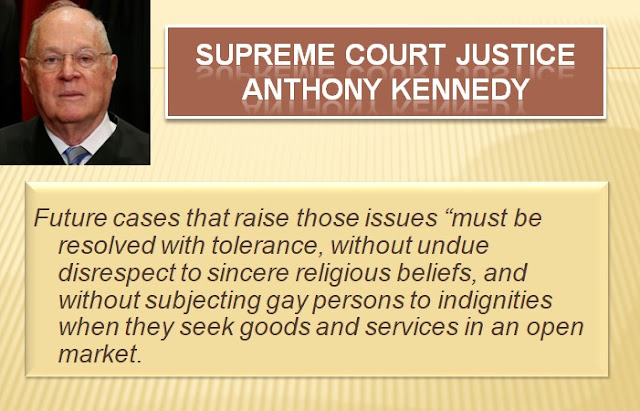 Supreme Court rules in favor of baker who would not make wedding cake for gay couple.  (Washington Post, 6/4/2018)


But Kennedy acknowledged that the decision was more of a start than a conclusion to the court’s consideration of the rights of those with religious objections to same-sex marriage and the rights of gay people, who “cannot be treated as social outcasts or as inferior in dignity and worth.”

Posted by Retiring Guy at 6:37 AM No comments:

Climate change as a matter of fact: Disappearing old ice in the Arctic 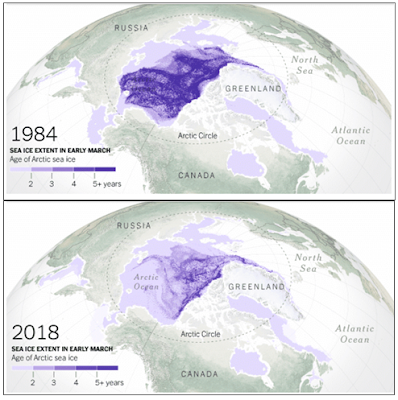 
As darker, heat-absorbing water replaces reflective ice, it hastens warming in the region. Older ice is generally thicker than newer ice and thus more resilient to heat. But as the old ice disappears, the newer ice left behind is more vulnerable to rising temperatures.

Posted by Retiring Guy at 6:32 AM No comments:


GOP orthodoxy. It was quite the mess. Ms Davis boldly told them she was withholding their licenses “by God’s authority”, never mind the court, and that to issue them would conflict with her Christian faith. She became a hero to the far right, not least when she was sentenced to five days in jail for her trouble. Two presidential hopefuls, Senator Ted Cruz and former Arkansas Governor Mike Huckabee, descended on the town, hoping to use her stand to burnish their evangelical credentials. 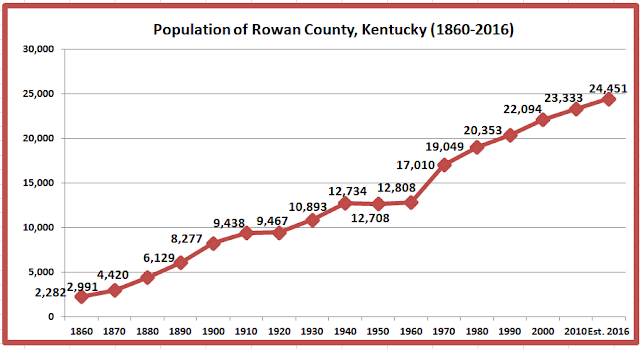 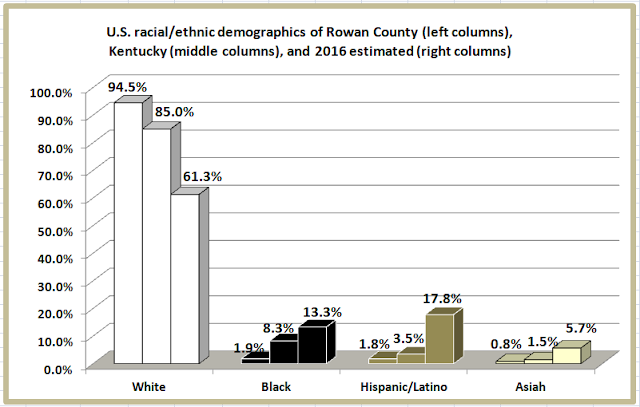 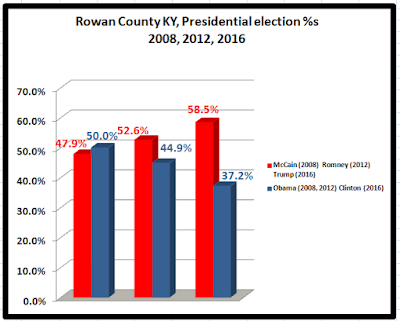