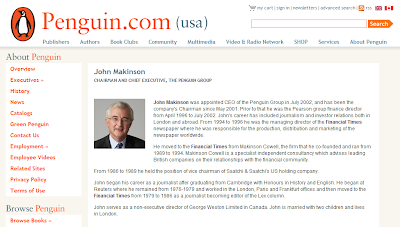 WSJ: Will there come a time when physical books are no longer published?

Mr. Makinson: No, I really don't think so. There is a growing distinction between the book reader and the book owner. The book reader just wants the experience of reading the book, and that person is a natural digital consumer: Instead of a disposable mass market book, they buy a digital book. The book owner wants to give, share and shelve books. They love the experience. As we add value to the physical product, particularly the trade paperback and hardcover, the consumer will pay a little more for the better experience. I looked the other day into the sales of public-domain classics in 2009, when all those books were available for free. What I found was that our sales had risen by 30% that year. The reason is that we were starting to sell hardcover editions—more expensive editions—that people were prepared to pay for. There will always be a market for physical books, just as I think there will always be bookstores.