Christmas 2010 the Tipping Point for Ebooks? 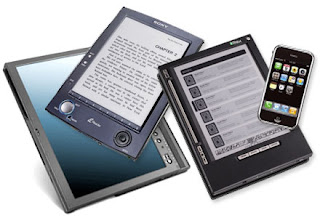 Excerpt: E-books now make up 9 to 10 percent of trade-book sales, a rate that grew hugely this year, after accounting for less than half that percentage by the end of last year. Publishers are predicting that digital sales will be 50 percent higher or even double in 2011 what they were in 2010.

January could be the biggest month ever for e-book sales, as possibly hundreds of thousands of people are expected to download books on the e-readers that they receive as Christmas gifts.

The anticipation of that jump in sales, and a feeling that the recession may have loosened its grip, has dissipated some of the death-of-print malaise that has lingered in the book publishing industry for years — and helped soften the blow of a significant drop in hardcover sales this year.

But even with widespread access to e-books, publishers have not yet figured out how to sell them more effectively to consumers. Debut fiction and so-called midlist titles — books that are not large commercial successes — are particularly tough sells in digital form, said Peter Hildick-Smith, president of the Codex Group, a book market research company.

And there remain urgent concerns about the health of the brick-and-mortar retail environment. Many independent booksellers around the country are still struggling in the face of Amazon, big-box retail rivals and e-books. Borders, the chain bookseller, has suffered from declining sales and a dismal earnings report in early December sent alarm through the industry.

“My No. 1 concern is the survival of the physical bookstore,” said Carolyn Reidy, the chief executive of Simon & Schuster. “We need that physical environment, because it’s still the place of discovery. People need to see books that they didn’t know they wanted.”