Excerpt: With continued requirements from Walworth County to add and improve the collection, that spells trouble for those in charge of the facility. In order to retain its funding from the county, the library must meet certain criteria for its 18,000 person service area.

"We have been having meetings about the collection," Library Public Services coordinator Alisha Benson said. "The issue that comes up is that we want and need to meet the standards, but we are also running out of space. We need 1,000 more DVDs, but where do you put that?" 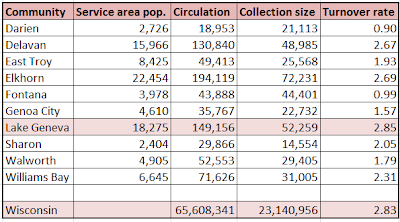 Lake Geneva is just a shade above the Wisconsin average.

But I suspect this quantitative standard from the Wisconsin Public Library Standards document ("library volumes per capita") is a major factor in Lake Geneva's collection development concerns.

From the draft minutes of the July 9 Council of Library and Network Development (COLAND) meeting.


Mike C. reported that the Department of Public Instruction has issued the Wisconsin Public Library Standards for a number of years. The standards are completely voluntary; DPI does not have the authority to mandate adherence to these. They are really a planning tool for public libraries if they choose to use them, and there are suggestions in the document on how to use them effectively. There are quantitative standards, a draft of which was sent out to COLAND members prior to today’s meeting. There are also a series of qualitative standards which cover all areas of library operations including governance, staffing, facilities, training, services, etc. The last edition of the standards came out in 2005. There are four different levels of quantitative standards: basic, moderate, enhanced, and excellent. The basic level is a level of service that every public library should be able to provide; higher levels are levels that libraries can plan for and try to achieve. Mike then described the population ranges and where they are in the levels of service. One suggested new quantitative measure is public use internet computers per 1,000 population. The charts also show the percent changes over the previous five years. He highlighted and discussed some specific items in the charts. Mike C. said DPI is open to all suggestions and Mike Bahr suggested a separate document showing past statistics and DPI recommendations as to where libraries should be operating. Mike B. also asked about statistics related to “reader seating.” In response to a question from Kristi Williams about national standards, Mike C. said Wisconsin has a better level of library service than most of the country. Jessica MacPhail asked about dropping the standard related to periodical titles because she thinks it meaningless in these days of BadgerLink, etc. Mike C. said there has been some discussion of this issue but there are still library patrons who want to use print periodicals, especially certain types of periodicals. There was also some discussion, prompted by a comment by Nita Burke, about an erroneous newspaper article a few years ago claiming that Wisconsin libraries were not meeting basic standards; even though the article was inaccurate there was damage done. Rick Grobschmidt commented that the article came from an appendix to a report by the Legislative Audit Bureau that was incorrectly interpreted.
Posted by Retiring Guy at 7:36 AM

So the updated standards have been released? Or not?

I've been thinking of expanding out periodical listings to include popular items like gossip, exercise and cooking magazines.