Eugene Kane (Among Others) Wonders What Happened to All the Voters 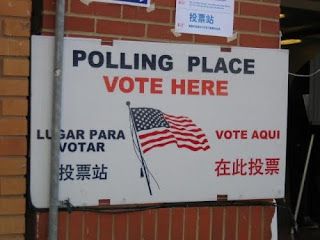 Excerpt:    Just about everybody I asked said they planned to vote on election day.

Either I hang with some extremely civic-minded people or somebody was lying.

After predictions of a relatively high turnout for the Wisconsin primary, the end results were disappointing.

Just fewer than 20% of eligible voters decided to show up at the polls, about 850,000 people voting in the two main primary elections for governor, according to preliminary figures.

Basically, that's two out of every 10 Wisconsinites with a right to vote who felt motivated enough to take a few minutes out of their day to scribble pencil marks on a ballot Tuesday.

Primary Voter Turnout Stays Low, but More So for Democrats. (FiveThirtyEight, 9/16/2010)
Most likely because there were more competitive races for the Republicans.  And has this, which was not limited to Wisconsin, been factored into the equation?
Posted by Retiring Guy at 8:43 AM