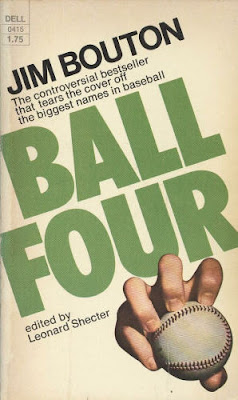 Excerpt: Forty years after the release of Bouton's "Ball Four," his behind-the-scenes diary of a season pitching in the big leagues, the book still resonates. And not just with curmudgeonly coaches and enthusiastic ballplayers.

"Without that book, I'd probably be a surgeon like my dad," said David Kipen who while in grade school was so smitten by Bouton's prose that he went on to become director of literature for the National Endowment for the Arts. "He hijacked my life."

Hijacked the national pastime as well because "Ball Four" changed the game and the way we follow it, helping to usher in free agency by exposing the pernicious practices of club owners while simultaneously exposing the widespread use of amphetamines in the clubhouse and the wild after-hours carousing of some of baseball's biggest stars.

That's why the New York Public Library rated it the best sports book of the 20th Century. And it's why the Pasadena-based Baseball Reliquary will mark the book's 40th anniversary Saturday at the Burbank Central Library with two panel discussions featuring the author.


Baseball Commissioner Bowie Kuhn was hopping mad. "This is a horrible piece of writing!" he fumed at Houston Astro Pitcher Jim Bouton, author of a new book called Ball Four. According to sources close to the commissioner's office, Kuhn went on: "You've done the game a grave disservice. Saying players kissed on the Seattle team bus—incredible! Or that some of our greatest stars were drunk on the field. What can you be thinking of?"
Time, nonfiction best sellers, August 31, 1970. 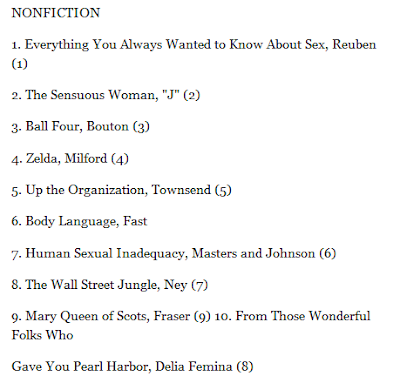 "Ball Four":  Better 'n Zelda.  Almost as good as sex!
LINKcat holdings of the NYPL "best sports book of the 20th century".  (Actually, it might be best to avert your eyes at this point.) 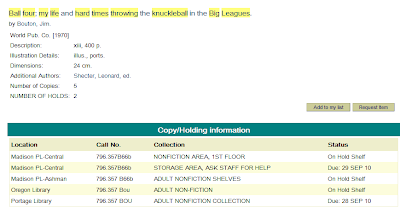 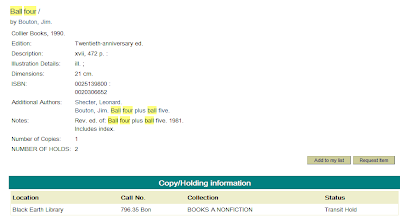