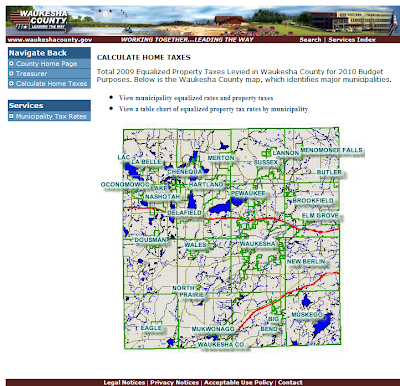 Excerpt: Waukesha County, long regarded as a bastion of property wealth, has posted its greatest decline in equalized values in the last three decades, according to information released recently by the state department of Revenue (DOR).

"This is the second year on record that we have seen a decrease, and it's more than double last year's. We haven't seen that in over 30 years of records," explained Norm Cummings, the county director of administration.

"Last year, the whole county went down 1.6 percent in value. That was the first time in 30 years. That was almost exclusively housing values that went down.

"This year, housing went down 4.2 percent more. That was a little unexpected. The other thing was commercial property also went down," he said.

"Overall, the reduction was 3.2 percent. That was higher than expected. We expected it to go down 2 percent - that is a huge difference," Cummings said.

The equalized value is the estimated value of all taxable real and personal property in each taxation district, by class of property, as of Jan. 1, and certified by the DOR on Aug. 15 of each year.