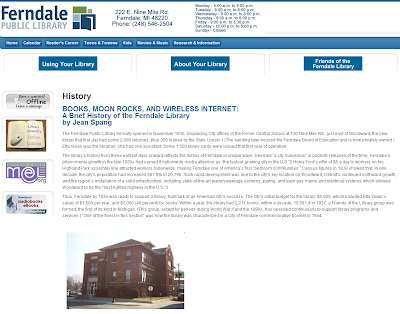 "Think Jetsons," said library director Douglas Raber in his modernized office. "We didn't want it to be a traditional-looking library with dark woods and a business-like atmosphere because that's not Ferndale. We wanted something modern but tasteful."

The library, at its original location at 222 E. Nine Mile, nearly doubled its size, from 11,000 square feet to 21,000 square feet. It also is firmly rooted in the 21st century by going completely wireless and adding 27 computers.
Advertisement

The 16-foot ceilings highlight the nearly-floor-to-ceiling windows. Natural light bathes every book. Cobalt blue cylindrical lights hang from the ceiling, while a gas fireplace surrounded by a bamboo wall soon will warm those seated near the courtyard.

In the original library, children had a choice of only a couple of small tables off to the side. Now, they have their own section decorated in bright orange, greens and blues with plenty of computers.
Posted by Retiring Guy at 8:16 AM