The Economist Bucks the Newsweekly Trend

At least for the short term. 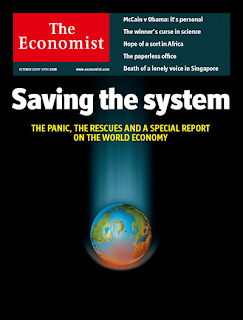 Excerpt: When The Economist began reporting figures to the Audit Bureau of Circulations in 1982, it printed about 80,000 copies and sold fewer than 8,300 on the newsstand each week. As of its last accounting, for the first half of 2010, the magazine sold an average of about 52,000 on the newsstand each week and had a total weekly circulation of just under 823,000. Newsstand sales, however, are off 9 percent from more than 57,200 in the last six months of 2009, and the number of short-term subscribers is high.

Over the years, other newsweeklies have lost huge blocks of their readerships (Newsweek and Time), reduced the frequency of publication (U.S. News & World Report) or stopped producing a regular print edition altogether (Life).

The Economist is available at 15 of 49 LINKcat library locations.
Posted by Retiring Guy at 8:30 AM