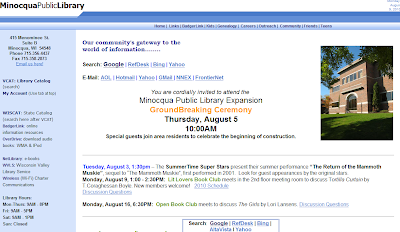 The expansion was overwhelmingly approved by Minocqua voters in a November 2009 referendum vote.

Features of the new library include additional space for materials, for computers, and for seating, a larger children's area, a young adult area, a program room and two meeting rooms, accessible restrooms, and a drive-up book drop and book pick-up.