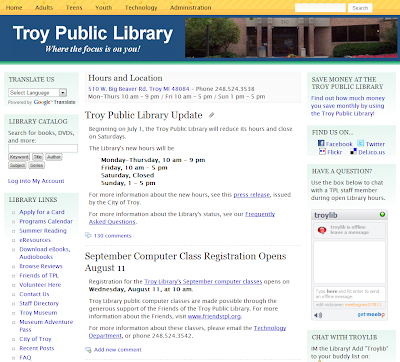 Excerpt: The Friends of the Troy Public Library and the Citizens to Save Troy Public Library's initiative supports the library, which is to close in July because of budget cuts. It would be run independently and administered by a nonpartisan elected board of trustees. The proposal the Friends drafted asks for 0.9885-mill for 10 years.

The three new proposals ask for millage amounts that hover just above or below 0.9885-mill; they all begin with a 9 and end with a 5.

"We think that this is an attempt to split our vote or make the ballot complicated or confuse voters," said Rhonda Hendrickson, a Friends spokeswoman. "This is an insult to the intelligence of Troy residents."

The residents who submitted the additional proposals -- Kathleen O'Laughlin (1), Robert Outland and William Redfield -- could not be reached for comment over the weekend.

(1)  From Wikipedia.  (Just assuming it's the same Kathleen O'Laughlin.)

With all of the dirty tricks we faced, we did pretty well, but LOST our library millage. The local tea party has done everything possible to kill the library.
It's sad.
Sharon @
http://keeptroystrong.blogspot.com/

Not just sad; scary. An uninformed populace is easier to control. Libraries inform and educate. Hey library supporters everywhere! Your library could be next. Your silence will not protect you.