Current library opened in 1981.   And look how some of the numbers have grown. 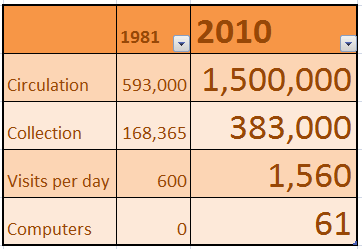 So have the folks at the Appleton Public Library. They’ve decided to keep their busy facility as-is and to postpone the expansion or relocation they have been contemplating for a few years.

As much as we support the work done at the library, holding off on a multimillion-dollar project is a wise decision.

Actually, it could end up helping the library in the long run.

Library Director Colleen Rortvedt, who has been on the job for about six months, came to her conclusion by analyzing how the library project fits into the big picture. She saw that there are too many other projects competing for funding from the city of Appleton and private donors.

The exhibition center and Houdini Plaza upgrades seem to be at the center of attention right now.

We give Rortvedt credit for holding off, even though a new or revamped library would be great for Appleton residents.