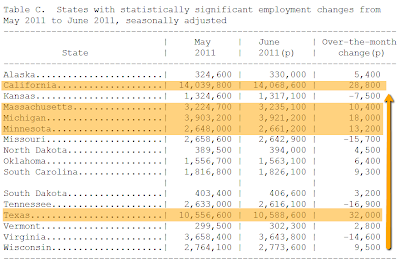 Excerpt:  But claims that Wisconsin accounted for half of the nation's employment growth last month are pure fantasy.

In fact, Wisconsin didn't manage to crack into the top five states in job growth, even with its best monthly performance since 2003.

Employment actually increased in 26 states last month, according to figures from the Bureau of Labor Statistics.

Moreover, the BLS figures are estimates based on interviews with employers, which further clouds their short-term value.