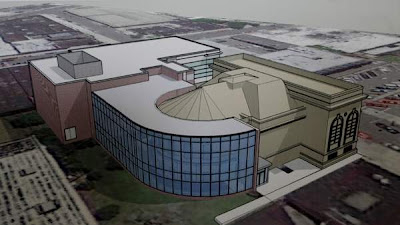 Excerpt: While the need to seek new bids will delay the first step toward a planned nearly $10 million restoration and expansion of the 108-year-old Carnegie library, Mayor Wilda Diaz is still hoping to get the work underway this year.

“It’s going to get done,” said Diaz ,who has made the rehabilitation of the library a priority in her administration. “We know it needs replacing. We’re trying to do the priorities, the roof and windows.”

Library Director Patricia Gandy and Barbara Sottilaro, president of the Library Board of Trustees, said the roof leaks at the front and back of the building. There are gaps in the bricks that allow water to get into the walls. Rooms in those areas have deteriorating walls from the water damage.

Sottilaro said the architect for the project wants to clean up the bricks and put a glass enclosure around the back of the building.
Posted by Retiring Guy at 9:36 PM