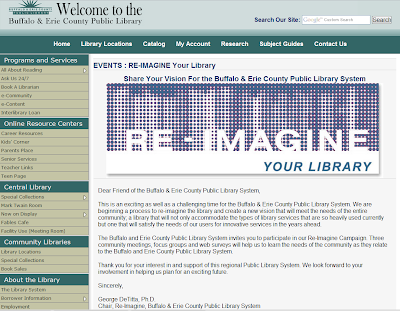 Opines the Buffalo News editorial board on November 12, 2010, "Rethinking the Library".

Excerpt: While we respect County Executive Chris Collins’ approach to a fiscally responsible budget, he has also called for sustaining key institutions that actually make Erie County an attractive place to live.

There’s no better example of that than the Buffalo & Erie County Public Library that serves more people than any other institution—including the Buffalo Bills and the zoo. And there’s no more worthwhile program of service than the libraries provide to children and adults of all ages.

Library administrators, trustees and directors must work aggressively to mitigate the year-to-year uncertainty of county and local government support, and devote more resources and expertise to outside fundraising and development.

That work would be made easier if the library system’s board of trustees and Library Foundation seats weren’t wasted on well-meaning lightweights and politically connected pals of the county executive and mayor.

These seats should be filled with experienced strategists and respected business leaders in the Western New York community whose influence could bring in the resources the library system sorely lacks.