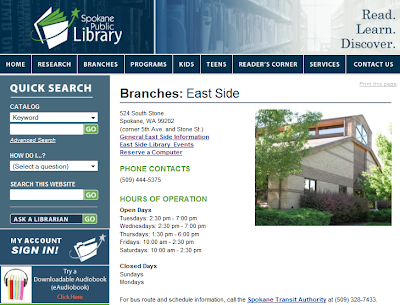 
Excerpt:  They disagree on many – perhaps most – of the major issues of the day, but Louise Chadez and Cindy Zapotocky are united on at least one: They strongly oppose the proposed closure of Spokane’s East Side Library.

Chadez, a liberal Democrat who ran unsuccessfully this year for state Legislature, and Zapotocky, the conservative chairwoman of the Spokane County Republican Party, were among about 15 people who testified against the possible closure during a Spokane Public Library Board of Trustees meeting on Tuesday.

“This is one of the first times that east and west are on the same page,” Chadez said before the meeting.

The library board, facing a deficit of nearly a half-million dollars, is considering closing the East Side Library, which would save about $150,000 a year. Library officials say East Side was chosen because it has the lowest number of visits and items checked out among the system’s six branches.
Posted by Retiring Guy at 4:40 PM