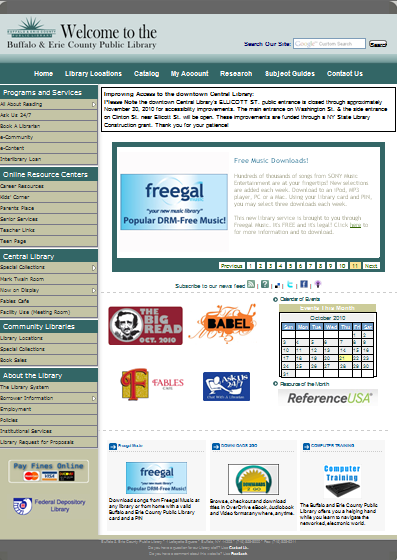 LINK
Link to October 21 Buffalo News article, "Library spells out impact of deep cuts in county funds.  Hours to drop sharply while use increases".
Excerpt: Erie County's proposed budget cuts will have a profound impact on its system of 37 public libraries.

Hours at branches in Alden and Boston will drop by more than half -- with Lackawanna's reduced by nearly two-thirds.

The sobering news for the embattled Buffalo & Erie County Public Library was presented Wednesday by Library Director Bridget Quinn-Carey to the Erie County Legislature. The system faces a $6.8 million shortfall next year, with the biggest gap resulting from the loss of $4 million in county property tax revenue that County Executive Chris Collins has ordered.
Related articles:
Deep cuts (again) in the works.  (9/17/2010)
Editorial puts in 'a word about libraries'.  (8/30/2010)
Library could lose 25% of funding.  (8/19/2009)
Posted by Retiring Guy at 9:21 PM