Pew Research on the 'Marriage Gap' 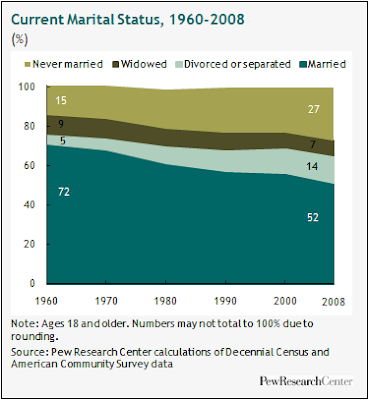 Excerpt from Executive Summary:  The transformative trends of the past 50 years that have led to a sharp decline in marriage and a rise of new family forms have been shaped by attitudes and behaviors that differ by class, age and race, according to a new Pew Research Center nationwide survey, conducted in association with TIME magazine, and complemented by an analysis of demographic and economic data from the U.S. Census Bureau.

A new "marriage gap" in the United States is increasingly aligned with a growing income gap.

Marriage, while declining among all groups, remains the norm for adults with a college education and good income but is now markedly less prevalent among those on the lower rungs of the socio-economic ladder.

Makes me wonder.  Is this the country that some folks want to 'take back'?