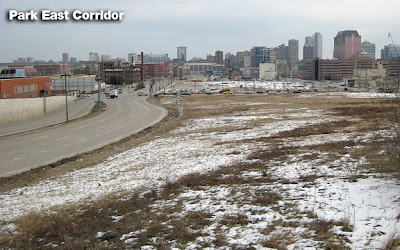 Excerpt:   Milwaukee Mayor Tom Barrett used a desolate strip of the Park East Corridor as the backdrop on Monday for what he described as Scott Walker's inaction at working to spur job creation as Milwaukee County executive.

Walker, in turn, said an emergency jobs plan would be his top priority as governor. He said he would call a special session of the Legislature on inauguration day and ask lawmakers to cut taxes for small business by up to 20% as part of his prescription to create 250,000 jobs in Wisconsin.

Both the Democratic and Republican candidates for governor focused on jobs and the economy on Monday, underscoring the importance of twin issues in the 2010 gubernatorial campaign.


On Monday afternoon, he stood in the empty, weed-choked Park East Corridor near East Pointe Marketplace and criticized Walker for his part in the failure to develop 16 acres of county-owned land that became available after the demolition of the Park East Freeway.

Barrett contrasted it with the development that's taken place in the Menomonee Valley, where the City of Milwaukee has played a role.

He also reiterated his criticism of Walker for closing - then reopening - a county economic development office.

Damon Dorsey, a former high-speed rail planner for the state, won unanimous endorsement Monday from a Milwaukee County Board panel to take over as the county's economic development director.
Related post:
Wisconsin's (Major Party) Gubernatorial Candidates Present Their Job Plans.  (9/20/2010)
Posted by Retiring Guy at 6:47 AM