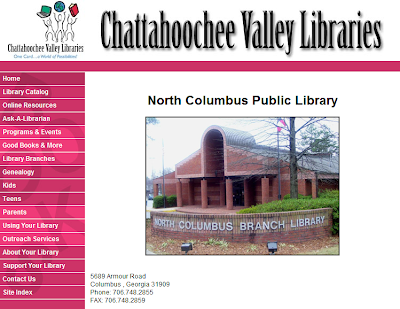 
Excerpt:   A 16-year-old who officials said continued to proselytize outside a library after officials warned him to stop has been banned from the Chattahoochee Valley Regional Library System for six months.

The teen said library employees first warned him to stop. "Then they took me into an office and told me not to do it," he said.

He said he then began talking to people outside the library, and patrons continued to complain.

Claudya Muller, director of the library system, said the ban had nothing to do with what the teen was saying. "As people came in, he would approach them. He prevented people from simply using the library."

The letter from Edwards says Caleb's library card has been blocked, and that if he returns before Feb. 28, he will be criminally trespassing.
A quick check of a few library conduct policies didn't turn up a specific mention of 'proselytizing'.
Pikes Peak Library District "Code of Conduct Policy".
•Soliciting or panhandling inside the Library or on Library property is prohibited.

Behavior Rules Governing the Use of Mulnomah County Library.
Any person who violates rules 6-19 while in or on library premises will be given up to one warning at the discretion of library staff; then the person will be asked to leave the premises for the day. Subsequent offenses by that person will result in that person's immediate ejection and exclusion from all Multnomah County Library premises. Any person so excluded shall lose all library privileges for a period of up to one year.
6. Engaging in conduct that disrupts or interferes with the normal operation of the library, or disturbs library staff or patrons, including, but not limited to, conduct that involves the use of abusive or threatening language or gestures, conduct that creates unreasonable noise, or conduct that consists of loud or boisterous physical behavior or talking. 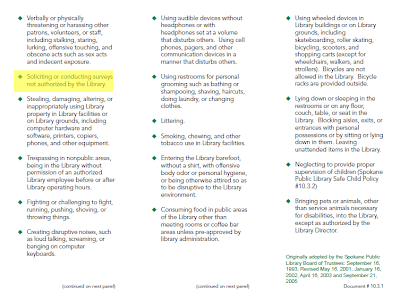