More of the Same From Telcos in Broadband Dispute 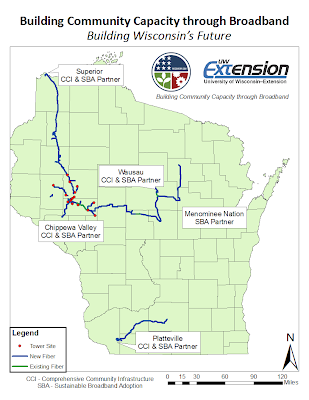 Excerpt:    Last year, UW-Extension was awarded about $32.3 million in federal grants to build 630 miles of fiber optic cable to four Wisconsin communities: Platteville, Wausau, Superior and the Chippewa Valley region. A separate grant of $5.1 million to UW-Madison will pay for building a network in the Madison area.

The cables will connect government buildings, libraries, schools and medical facilities to form what are called Community Area Networks (CANs). It will not go to private businesses or homes.

Although many of those facilities already have some access to broadband, proponents say having their own network will reduce costs. It will allow schools and cities to pool resources and ensure public facilities can handle an ever-increasing amount of information, according to grant supporters.

In the Platteville area, library users complain about getting kicked off the Internet because it’s too slow, and the senior center can’t handle streaming video, said April Fuhr, community outreach coordinator for the Platteville network.

She said because job-seekers often use library computers to fill out applications, it’s critical that Internet access is sufficient.

“A lot of times they get timed out because the speeds are so low,” she said. “You tell anyone who’s been working on an online form for two hours, ‘Sorry it’s gone.’”


The telco representatives interviewed for this article aren't asked to respond to any of these realities, including Wisconsin's national ranking of 43rd place for high-speed Internet access..  The reporter allows them to repeat their standard talking points ad nauseum.