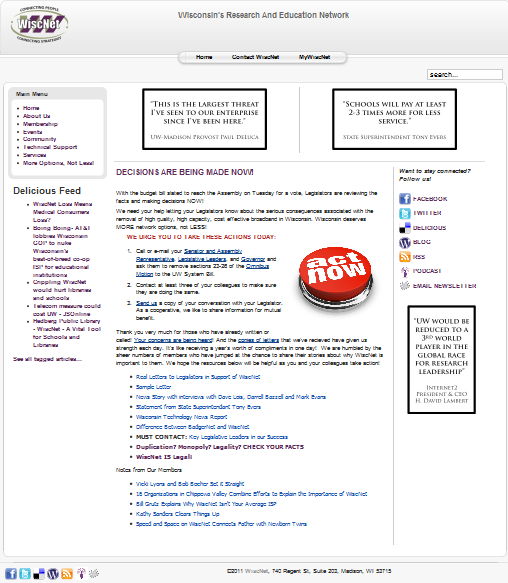 Excerpt: School Board member Peter Vedro said the proposal would limits students' access to "21st century tools" they need in the modern age. He faulted the Walker administration for saying it supports public education while taking actions harmful to schools.

"I think it’s a movement in the wrong direction in terms of supporting our kids in the larger educational pursuits," he said. "This is a continuation of on the one hand saying he supports education, or his administration is supporting education, or words to that effect, but his actions are diametrically opposed."

Sen. Olsen said one motivation for the move to restrict WiscNet is it is competing with BadgerNet, a similar public service telecommunications organization. BadgerNet is operated by the state’s Department of Administration and also provides services to schools, libraries and other public agencies.

"If WiscNet keeps growing, then BadgerNet shrinks," Olsen said. "WiscNet will take all the good ones, the easy ones, and BadgerNet will be left with all the schools out in the rural areas, the distant ones, and can’t compete and can’t provide service for them."

It seems helpful first to define WiscNet and BadgerNet, since confusion exists about the difference between the two and how they would be affected by these policy changes. In simplest terms, BadgerNet is a public-private partnership that provides the wide area network, Internet transport, video applications and network services throughout the state. It is the pipeline. [Emphasis added.]

WiscNet is one of the Internet service providers (ISPs) from which BadgerNet customers can choose. It provides what flows through the pipeline. WiscNet was created in 1990 by the UW, long before most telephone companies could even be called ISPs. In fact, one could say that WiscNet brought the Internet to Wisconsin. WiscNet has become the ISP of choice for 450 educational and community institutions: All public institutions of higher education, 95 percent of public libraries and 80 percent of schools currently use WiscNet.

Apparently, Sen. Olsen doesn't quite get it.