But whatever it looks like on any particular day, democracy always needs our full attention. 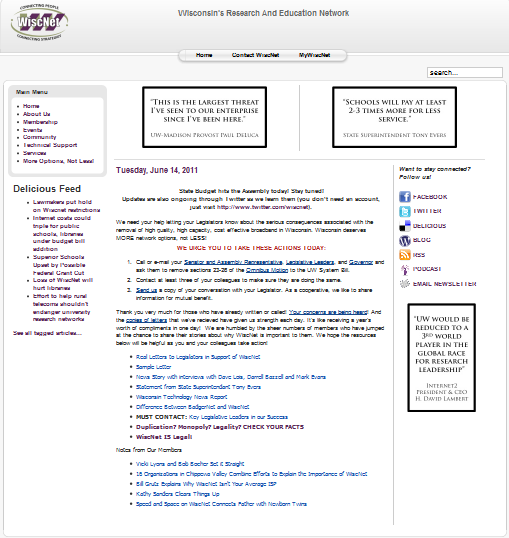 Excerpt:   Rep. Robin Vos (R-Rochester), co-chairman of the committee, said Tuesday the Assembly would adopt an amendment to the budget to reverse some of the committee action. That would allow the federal money to be used over the next two years and also hold off on implementing the restrictions on WiscNet until July 1, 2013.

Between now and then, an audit would be conducted to determine how WiscNet is used, Vos said. The broadband industry has complained WiscNet unfairly competes with their networks.
WiscNet supported

Vos made the announcement around the time eight Republican representatives from rural areas sent him and Jeff Fitzgerald a letter urging the changes.

"Consumers, regional economic development groups, schools, libraries, and higher education institutions have all expressed their concern that the discontinuation of WiscNet would have a devastating effect on access for our constituents, increasing costs and limiting accessibility," read the letter from Rep. Howard Marklein (R-Spring Green) and the others.