Tech blogs are starting to pick up the WiscNet story. 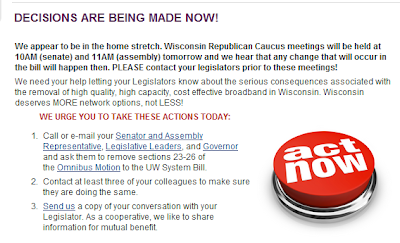 Excerpt:  In October of 2010, the WSTA launched a campaign denouncing a UW plan to use federal stimulus money to expand WiscNet's presence in four Wisconsin communities.

"A duplicate network will increase costs for everyone and impact the ability of local telecommunications providers to invest in their communities," declared WSTA's Executive Director William Esbeck. "With scare state resources, do we really need the UW using government money to stifle private sector investment and threaten local jobs and businesses?"

The trade association went so far as to suggest that UW/WiscNet's activities were unlawful. "The legal issues are being researched and lawsuits are a possibility," Esbeck insisted. "The UW does not belong in the telecommunications business . . . the current statutes are very clear on that point."

Actually, the Wisconsin statutes that Esbeck cited are anything but clear. Sure, section 16.972(2)(a) says that no Wisconsin state agency:

provide such computer services and telecommunications services to local governmental units and the broadcasting corporation and provide such telecommunications services to qualified private schools, tribal schools, postsecondary institutions, museums, and zoos, as the department considers to be appropriate and as the department can efficiently and economically provide.

Undaunted by these inconvenient technicalities, the group asked for "more legislative review of UW's broadband plans." Eventually, that review arrived in the form of the already mentioned omnibus legislation. Section 23 of the new proposal would prohibit the UW system from receiving or dispersing any funds from the NTIA's broadband stimulus program. Section 24 would amend current law to prevent the state's Board of Regents or UW System from providing telecommunications services "that are available from a private telecommunications carrier to the general public or to any other private entity" to anyone except the UW system itself.