Disappearing cities and boroughs of the Keystone State: Clairton, Pennsylvania

Have you ever wondered what the world would be like if you fast-forwarded into the distant future only to find yourself standing in the middle of post-apocalypse? Set aside a main road in Clairton, Pennsylvania, this strange world actually exists, sitting quietly on each side of a cracked and forgotten neighborhood street. So what exactly happened on Lincoln Way that made everybody abandon their homes in such a mad dash? What kind of stories sit buried in the remnants left behind by each family previously inhabiting these 16 houses? Was it a matter of fear as urban legends state, or simply the environment? Asking local authorities, or even the locals surrounding town, you can never exactly get a straight answer, while most will avoid answering completely. 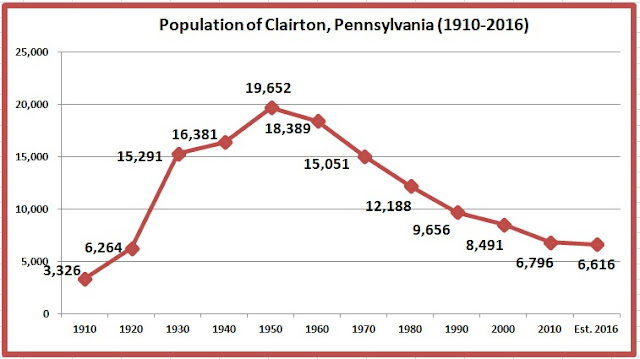 The City of Clairton, "the city of prayer", is located in Allegheny County, 12 miles south-southeast of Pittsburgh.

Related reading:
U.S. Steel is appealing a $1 million Clairton Coke Works fine in a public hearing this week.  (Next Pittsburgh, 12/5/2018)


Although air quality all over the Mon Valley has improved considerably since Pittsburgh’s industrial era, our region still has some of the worst air quality in the nation. In the last decade, experts and residents around the region have been alarmed by public air monitors showing increasing levels of carbon and sulfur dioxide in our atmosphere. Experts at the Health Department, as well as many environmental groups, say these increased levels are a direct result of the Clairton Coke Works which is high on the list of the top 10 polluters in the region.


Apart from providing community pride, football serves as a neon advertisement that, despite its troubles, Clairton remains open for business. In fiscal 2011, the city budget finished in the black for the first time in at least a decade. United States Steel has invested more than $500 million to upgrade the nation’s largest coke plant here along the Monongahela River, 12 miles south of Pittsburgh. A grocery store is planned for next year. Real estate is plentiful and cheap.


In every sense, Clairton is a mill town, totally tied to the rhythms and rumblings of the grimy giant that occupy nearly two miles of frontage on the Monongahela River, at the foot of the 2.5-square-mile area that is called 'Minor'. Trucks thunder in and out at all hours. The whistle blows at a quarter to eight, a quarter to four and a quarter to midnight, and one enters and leaves, always with a lunch pail and a Thermos, past a sign that notes how many days have lapsed since the latest accident that cost lost time.