Excerpt:     Predicted to be among the biggest sellers this holiday season, e-reading devices - Kindles, nooks, iPads and the like - have mushroomed in popularity over the past year.

Unfortunately, some library users who buy the devices are surprised to learn that the electronic books available through Waukesha County libraries are not compatible with Amazon's Kindle, one of the best-selling electronic reading devices.

It's not a problem limited to Waukesha County, or even to libraries in general. The only electronic books that will work on a Kindle are the ones available for download at Amazon.com, according to David Burleigh, director of marketing for Overdrive, the distributor that provides e-books and other digital content to the member libraries of the Waukesha County Federated Library System (WCFLS).

The problem, Burleigh says, stems from the fact that there are three main operating systems used in e-book publishing: the Kindle system, the Apple system used by the iPad, and the Adobe system used by the Sony Reader, Barnes and Noble's nook, and most other devices. The Adobe system is the one supported by Overdrive, which is the country's largest distributor of online content to libraries, Burleigh said. 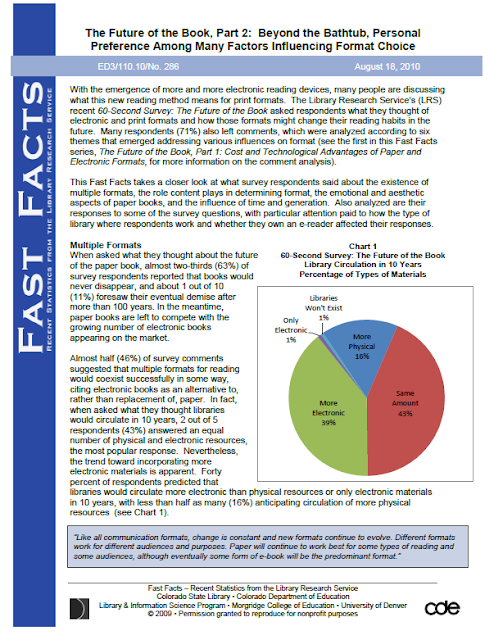 Excerpt:   When my turn came to ask a question, I asked [John] Sargent [CEO of Macmillan] if he had thought about the role of libraries, and particularly public libraries, in ebook distribution. His answer indicated that just as he was not afraid of changing the relationship with Amazon, Sargent is not afraid of changing the publisher's relationship with libraries. In fact, change may well be required.

"That is a very thorny problem", said Sargent. In the past, getting a book from libraries has had a tremendous amount of friction. You have to go to the library, maybe the book has been checked out and you have to come back another time. If it's a popular book, maybe it gets lent ten times, there's a lot of wear and tear, and the library will then put in a reorder. With ebooks, you sit on your couch in your living room and go to the library website, see if the library has it, maybe you check libraries in three other states. You get the book, read it, return it and get another, all without paying a thing. "It's like Netflix, but you don't pay for it. How is that a good model for us?"