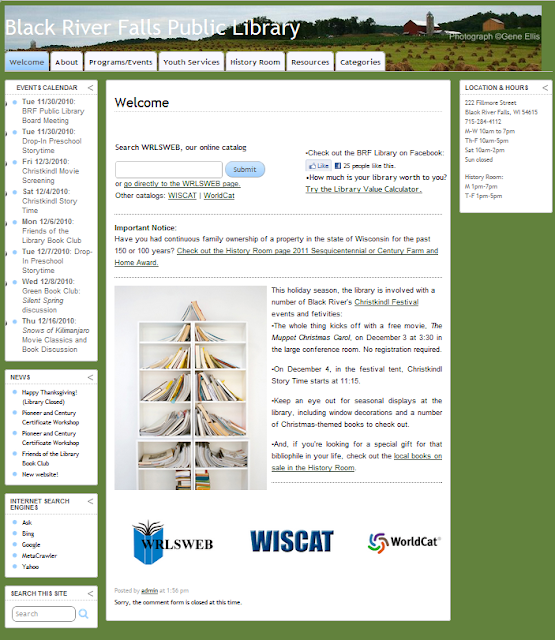 Excerpt: The committee voted to set the levy after a brief public budget hearing the same evening where Library Board President Jon Warmke and Library Director Muriel Gunderson spoke, noting the value of public libraries and the impact inadequate funding has on their services.

Gunderson also spoke at last month’s Committee of the Whole meeting where the committee set the preliminary levy and reviewed department budgets. There, she inquired as to why the library took a cut in funding from what it had asked for in its budget.

Both Warmke and Gunderson noted the library cannot afford to pay full-time employees and offer benefits and asked that the library’s level of funding be considered in the future.

“(We) encourage you to do what you can in terms of the library budget,” Gunderson said.

Beginning next year, the library will reduce its open hours from 54 to 45 a week. The hours cut will come in the mornings, and the library will open two hours later Monday through Thursday and an hour later on Friday.

The library board approved the new schedule on Dec. 14.

“That is the most effective way to handle our budget concerns and staffing concerns,” said board president Beth Hilliker. “We just felt this is the best way to handle the current situation and protect overall library services to our patrons.”

The move comes after the city had to find creative ways to balance its 2010 budget. The city not only was unable to increase its funding toward the library but also asked the library to pay $6,500 for library insurance and administrative costs; the city previously did not charge the library for those costs.

Library Director Muriel Gunderson said staffing issues also contributed to the reduction in hours. Two of the library’s nine part-time staff members had to have their hours reduced in order to stay at or below 24 hours; city employees who work more than 24 hours are required to enroll in the city’s health insurance plan.
Posted by Retiring Guy at 6:51 AM