.. and any other tax-supported service, apparently.

Letter to the editor: Is Boulder Junction headed for a great depression? (Lakeland Times, 11/22/2011)

The letter writer, Patricia Mabie, is a frequent contribution to the Lakeland Times.

Excerpt:   Can you find "Abraham Lincoln: His Speeches and Writings" at the Boulder Junction Library anymore? Or "The Education of Henry Adams?" or Alexis de Tocqueville's "Democracy in America?"

It's not that the books are checked out. They're just gone. Has anyone been reading them recently? Did the librarian take them off the shelves and discard them? Seldom-read books are removed from the shelves and replaced with the hot titles or best sellers.


It's called resource sharing, Patricia, one of the way in which libraries use technology to adapt to changing times.  Would a substitute title be OK?

How about a copy of Democracy in America? You have some choices here. 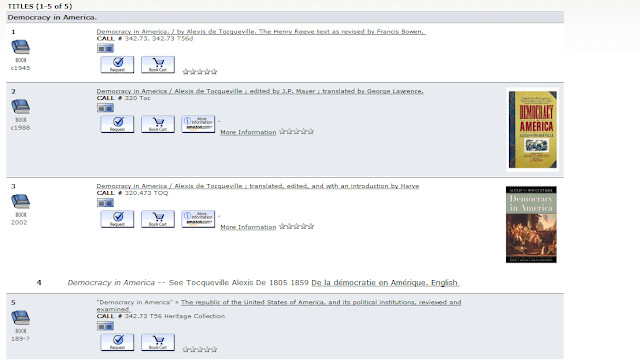 \Public libraries are wonderful. They have done much for literacy over the century and a half. However, they are on their way out, just as jobs for life, telephone booths, records and now CDs.

The electronic books, such as the Kindle, iPad and Nook can be downloaded rapidly and cheaply. Sure, an e-reader is more expensive than a trip to the public library, but it's more fun and more modern. We are becoming an electronic tech society.

Public libraries were modern once, too, in the early 20th century, when many people had no access at all to literature. Old valuable research books are being thrown away, only to be replaced by modern best sellers. The new modern libraries have fireplaces, cafes and chat rooms. It is a book-centre or a learning-centre, but it is no longer a library. It has morphed beyond its original purpose and become something else, designed to address different needs.

The Boulder Junction Library is going to become a glorified Barnes and Noble store subsidized at taxpayers' expense.