Charlotte Observer Editorial: "Should city 'stay in its lane' on libraries? 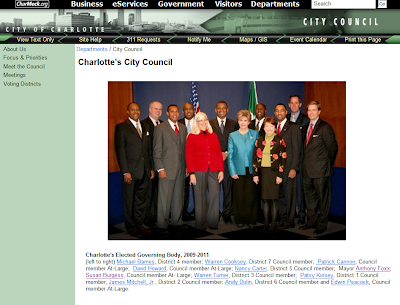 Excerpt:  Council member Susan Burgess, who opposes using city money to help the library, said at a council budget meeting last week, "I love the libraries ... but we ought to stay in our lane. It's a slippery slope." Council member Patsy Kinsey said, "I cannot in good conscience send city money over to support the county." Other council members have said similar things.

Let's see if we understand. It's fine to spend millions upon millions on pavement to bail out the state legislature in Raleigh, but not OK to pony up far less to help keep most of the libraries in your own home county from closing? Yes, pavement is important - up to a point. It is not more important than libraries, however.

The library system, which is independently chartered but which has depended almost exclusively on money from county government, faces the loss of almost half its budget from a cash-strapped county. It has asked Charlotte, the six other Mecklenburg municipalities and the county for more help. Mayor Anthony Foxx has said he'll veto the city budget if it doesn't set aside some money in case a library deal can be worked out. He's using the possibility of city money as a sort of challenge grant - the city would chip in if the other towns do, and if the county does (and if the council approves).

Council members may have questions about how the library has managed resources. Some may question the relative importance of libraries compared with public schools or the park and recreation department or community colleges. It's appropriate to consider those issues. It's also appropriate to make sure any city money would be, truly, a one-time thing.

Charlotte Mecklenburg libraries haven't seen such large-scale reductions since the Great Depression. (3/17/2010)
Posted by Retiring Guy at 6:56 AM