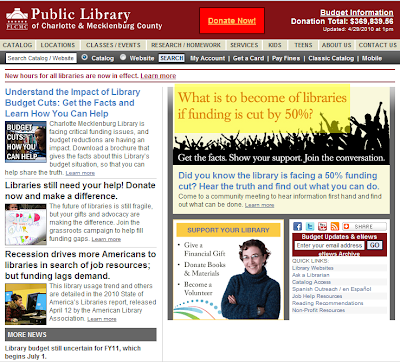 Excerpt: The cash-strapped library system has come up with a new idea for easing a possible $17 million cut in county money for next year: Ask local municipalities to help make up some of the difference.

But some leaders from the cities and towns say that while they want to help the libraries, it will be very difficult - if not impossible - to come up with the $3 million Charlotte Mecklenburg Library officials have pitched.

Many are facing their own money problems, and appear leery to take on what might be a multi-year financial commitment. Plus, many already are well into their budget deliberations for next year.

Mecklenburg County has told the library system to expect up to a 50percent cut in county money next year. Library leaders said a cut that large would lead to layoffs, branch closures and possibly reduced hours, among other changes.

Charlotte Mecklenburg libraries haven't seen such large-scale reductions since the Great Depression. (3/17/2010)
Posted by Retiring Guy at 8:05 AM