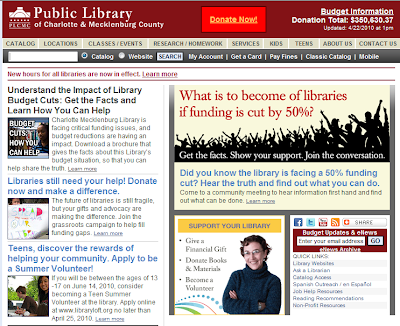 Excerpt:      We are living in unprecedented times in Charlotte-Mecklenburg. After decades of prosperity, we have entered an era of scarcity, which is being profoundly felt by people who rely on our public libraries for educational and enrichment opportunities.

Since January 2009, library funding has been reduced by more than 20 percent. Investments in books and computers have been slashed, classes and storytimes eliminated, salaries reduced and 120 employees laid off. Most recently, library hours were curtailed significantly.

These reductions have affected everyone - first and foremost, those who use the library as an educational resource: toddlers benefiting from literacy programs; youths receiving homework assistance; college and vocational students using library computers and resources to support their coursework; adults and senior citizens using the library to continue their education; and job seekers who use library resources for career enhancement and job searching. And, of course, library staff, many of whom saw their work at the library as career and mission.

Charlotte Mecklenburg libraries haven't seen such large-scale reductions since the Great Depression. (3/17/2010)
Posted by Retiring Guy at 8:57 AM