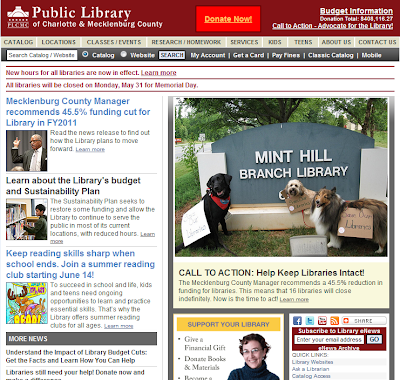 Excerpt: When I was a young child, my parents would bring me to the library for story time every Saturday. It was the highlight of my week, because it meant that I was afforded the opportunity to travel to magical times and places. From the Far East to the wonders of Atlantis, story time brought me to new lands and new possibilities.

Only now, looking back, can I fully appreciate the impact this tradition had on my life. As an IB student at Myers Park, my curriculum is extremely rigorous, and many of my classmates have lost their sense of joy in learning because of the program's rigor. I, however, see each class as just another story time at the library - it's my chance to travel and learn and grow, and if it were not for the library, I would never have had this point of view.

I still go to the library every Saturday, but now it's mostly for work rather than play. No matter how stressed I am, however, the moment I step through the clear glass doors, I can smell the odor of old books which permeates and characterizes a library, and it reminds me why I'm there. The shelves of knowledge waiting to be discovered, the meticulously maintained furniture, even the carpets somehow radiate peaceful wisdom.

My preferred location is upstairs, and on my way up I pass people of all ages - grandparents introducing their grandchildren to the ways of the world, students researching their latest papers, and countless others who simply want to curl up with a book. I pass the group study area and go to my refuge, my haven - the silent study room. Here, turning a page too loudly is enough to earn the glares of your fellow academics. I sit in the corner seat by the window, where I can see the sky, and begin to work.

Charlotte Mecklenburg libraries haven't seen such large-scale reductions since the Great Depression. (3/17/2010)
Posted by Retiring Guy at 9:23 AM