Charlotte Mayor Anthony Foxx on the Art of Governing 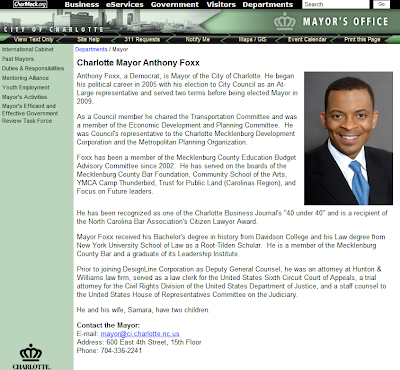 Charlotte Mayor Anthony Foxx
Link to May 30 Charlotte Observer "In My Opinion" column by Tommy Tomlinson, "In library crisis, mayor relies on 'art of governing'."

Excerpt: I asked Foxx why he's making his stand on libraries, and not schools or parks - areas the county plans to cut even deeper. Foxx's great-aunt was a librarian at the Main Library, and he used to go there on Saturday mornings. But he went to public schools and uses public parks, too. It's not personal. Again he says: "This conversation didn't start with me."

But one of the arts of governing is putting yourself in a place to succeed.

Let's play it out. There are three likely outcomes: The county votes no and kills the whole deal; the county chips in but the City Council opts out (which would require overriding Foxx's veto); or a deal gets done.

Also, libraries are a safe issue - there's no deep anger as there is regarding the schools - and $2 million for the libraries can make a big difference.

Maybe there's an angle I'm missing, but this seems like a no-lose deal for the mayor. My guess is, his heart is in the right place. But it's always dicey to figure out a politician's heart, and anyway the real measure is the ability to get things done.

In the next couple of weeks we'll get a handle on how well Anthony Foxx is learning that art.

Mayor Foxx [ mayor@ci.charlotte.nc.us] is paying attention to what he loves and values.  (Line 7 of article excerpt.)

Charlotte Mecklenburg libraries haven't seen such large-scale reductions since the Great Depression. (3/17/2010)
Posted by Retiring Guy at 9:10 AM