Address:  500 West Third Avenue (at the corner of Poplar) 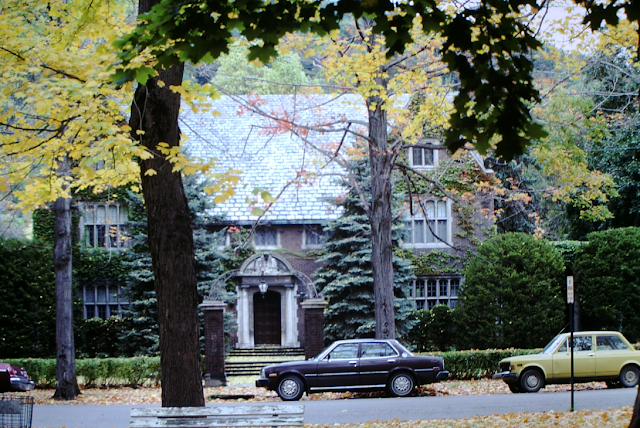 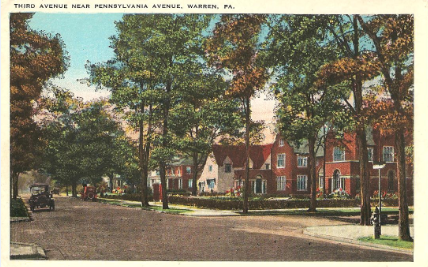 On Millionaires' Row.  Among Warren's most elegant turn-of-the-century residences is the Logan-Wallace house on West Third Avenue. It took workers three years to build this seven-bedroom brick English Tudor mansion for H. A. Logan, a wealthy oil refinery owner.

As current owner Beverly Sibertson recalls, Harry Logan was married to an English actress and "he wanted to make her feel at home." So he commissioned New York architect Albert Joseph Bodker to design a house reminiscent of one in the English countryside.

Harry Jr. graduated from Princeton University.  His absence from any of the Warren High School y yearbooks from the 1940s leads me to assume that he attended private boarding schools before going to college.
Posted by Retiring Guy at 7:07 PM

Harry Logan Jr., like his brother-in-law, John Wendell, husband of Marian Logan Wendell, attended The Hill School in Pottstown, Pennsylvania ... as did I, albeit many years later.

I also had the privilege of growing up in this gorgeous house, moving there in 1972, and called it home until my mother sold it in 2001. I'd be happy to answer any questions about "The Manse" as we called it (as it was the property of Trinity Memorial Church when we moved there). Feel free to contact me.

For the record, the 2nd floor has 2 (His & Her) master bedrooms, each with marble fireplaces. All 4 bedrooms have a private bath. The "His" master bath has a deep and long tub custom tub made by order of Harry Logan to allow him at his full 6'6" height to stretch out in. The "Her" master bedroom suite includes a dressing room with built in jewel safe.

There are 2 other safes in the house, a large walk-in safe in the basement installed on the eve of Prohibition to house Mr. Logan's private liquor stash -- he bought the entire contents of a Pittsburgh liquor store just before Prohibition was enacted. The 3rd safe is hidden in the dining room behind beautiful large panels.