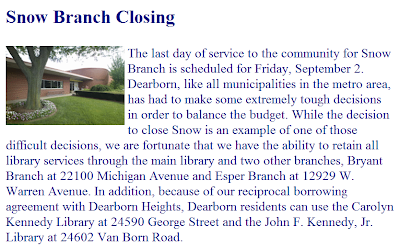 Apparently, the worst isn't over.

Every city employee received the dire prediction as part of a three-page memo that also laid out the steps Paletko plans to take to try to keep an emergency financial manager from taking control of city government.

According to the memo, which formalizes proposals Paletko began publicly discussing earlier this month, starting in the second week of September:

• All elected officials will be asked to take a 10 percent pay cut.

• All city buildings, except for police and fire stations, will be closed on Fridays.

• Employees working in the closed buildings will be furloughed and have their pay cut 10 percent.

• Cell phone stipends for all city employees will be eliminated.

The downsizing measures come in response to a gaping budget deficit for the city, which like all southeastern Michigan communities, has been pummeled by tumbling property tax revenues and increasing structural costs. Out of a $36.4 million budget, the administration projects about a $5.1 million shortfall for the current fiscal year.  [Emphasis added.]
Posted by Retiring Guy at 7:50 AM