You can't see the forest for the trees. 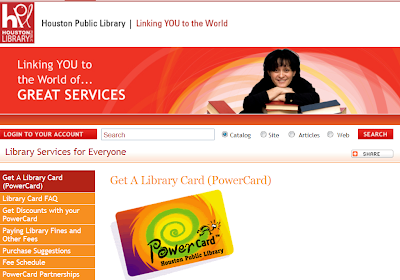 Excerpt: One look at the Houston Public Library's delinquency records is enough to both buoy and sink the hearts of book-lovers: Borrowers seem to like the printed word so much that they've failed to return 243,102 books since 1999.

In all, 119,558 library patrons have taken 325,000 items from the system since 1999, according to a Houston Chronicle analysis of the delinquency database.

How does it happen? Easily, it turns out.

Borrowers simply provide a valid photo ID with their current address to get a library card, and then they can check out as many as 50 items at one time.

Before 2005, library-card holders were able to borrow an unlimited number of materials at one time, and it wasn't unusual for some to check out hundreds of taxpayer-funded items. 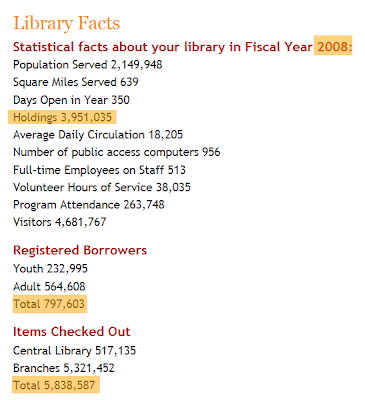 Based on a sampling of statistics from 1999 to 2008, the Houston Public Library averages 6,000,000 circulations per year.   In other words, of the approximately 60,000,000 items circulated in the time period of the Houston Chronicle's analysis, only .5% ended up in the delinquency database.  On the flip side, that's better than a 99 and 44/100s success of return rate.   (Defining 'success' as not appearing in the delinquency database.)

[Not strictly an apples-to-apples comparison, but I'll add it anyway.]  According to Chris McGoey, a professional security consultant, [t]heft from stores, including employee and vendor theft, cost retailers many billions of dollars per year.  Independent retail studies have estimated theft from retail stores costs the American public 33.21 billion dollars per year. Depending on the type of retail store, retail inventory loss ranges from .7%-2.2% of gross sales with the average falling around 1.70%.

On the other hand, perhaps our hearts would really sink if we include the items that disappear from library shelves WITHOUT being checked out.
Posted by Retiring Guy at 12:46 PM