The four branches targeted for closing: 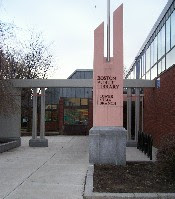 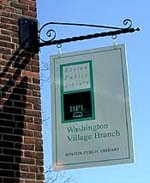 Excerpt:   The mood oscillated from anger to resignation yesterday as nearly two dozen speakers stood before the trustees of the Boston Public Library and implored them not to close a single branch in the face of budget cuts.

Trustees acknowledged the pleas but ultimately rejected them, voting to shutter four neighborhood branches to help eliminate a $3.3 million shortfall. The alternative would have affected more people, trustees said, by slashing hours so severely that most neighborhoods would have a library open just two or three days a week.

The plan, accepted hours later by Mayor Thomas M. Menino, would cut up to 25 positions by closing the Faneuil branch in Brighton’s Oak Square, Lower Mills in Dorchester, Orient Heights in East Boston, and Washington Village in South Boston’s Old Colony Housing Development. It would also slash 69 of the 305 jobs at the main library in Copley Square, leaving fewer support staff members and librarians to help the public.