The Skinny on Boston's Branch Libraries 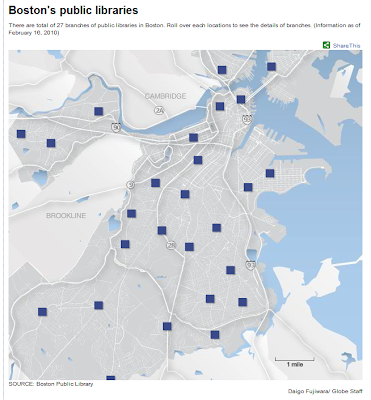 Excerpt: A clearer picture emerged yesterday of which Boston library branches may be in danger of closing as the city released a wide range of data for each location, quantifying foot traffic, wireless Internet sessions, and attendance at public programs.

The 15 individual measures, which draw on statistics from 2009, lay out in stark detail which branches are less used, clustered close to other locations, and have inadequate facilities. The data revealed, for example, that almost twice as many people walked in the front door of the West End branch than the North End branch, which is roughly a dozen blocks away