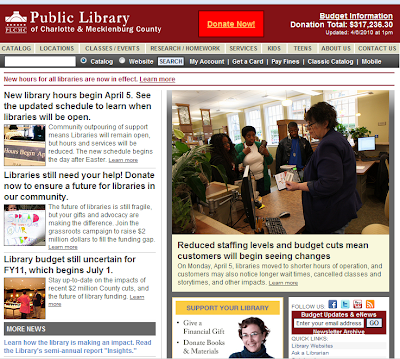 Excerpt:   The Charlotte Mecklenburg Library board should never have proposed closing half its branches last month, County Manager Harry Jones said today at a community meeting.

Instead, Jones said, the board should have been able to foresee from the start that a better solution would be the one it eventually passed, which keeps all libraries open for reduced hours with some layoffs to cope with a $2 million county budget cut.

Charlotte Mecklenburg libraries haven't seen such large-scale reductions since the Great Depression. (3/17/2010)
Posted by Retiring Guy at 10:49 AM