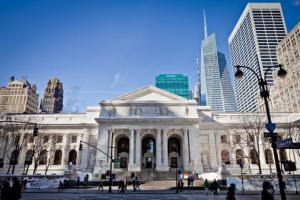 Excerpt:    One of the New York City’s most revered and cherished icons is celebrating its 100th birthday this year – and thanks to a monumental restoration, it looks just as beautiful as it did on the day it opened as “The People’s Palace” in 1911.

The New York Public Library has just completed a three-year, $50 million restoration and preservation of the landmark Stephen A. Schwarzman Building on 42nd Street, which has stood as an impressive symbol of opportunity and access for the people of New York City and the world for a century.
Posted by Retiring Guy at 7:05 PM