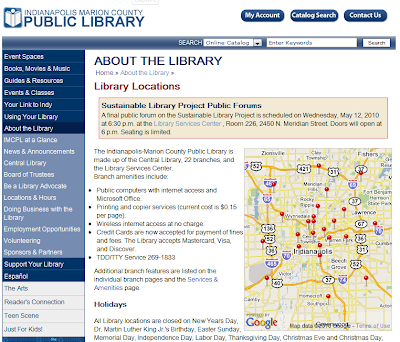 Excerpt: The city pledged on Tuesday to keep open the six library branches that the Indianapolis-Marion County Public Library has said could close because of budget constraints.

Exactly how the city would help is still uncertain, but leaders made it clear that coming up with a stopgap measure to avoid the closings is critical.

"The mayor is committed to keeping the libraries open until a long-term solution is found," said Robert Vane, deputy chief of staff and communications director for Mayor Greg Ballard. "But he is clear: A long-term solution must be found."

The city's promise comes a day after residents packed a public forum on a plan that library officials have floated to deal with a $3.2 million shortfall caused by property tax caps. Another forum is set for tonight.  [Emphasis added.]