Indianapolis-Marion County Residents Speak Up for Their Libraries 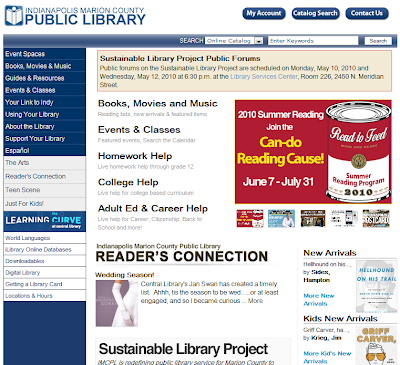 [Retiring Guy would have preferred a "stronger" adjective in the headline.]

Excerpt: Speakers at the forum, held at the Library Services Center on the Near Northside, urged Indianapolis-Marion County Public Library leaders to keep all 23 locations open.

Several pointed out that the city is being asked to chip in much more to keep the Indiana Pacers playing at Conseco Fieldhouse, a point that repeatedly drew loud cheers from the crowd. Speakers also complained that closing libraries would hurt underserved inner-city neighborhoods and force many youngsters to walk longer distances to use a computer or find books to read.

"Every family does not have a computer at home," Morris, 48, said before the meeting. "Libraries, in my opinion, do build communities."