Another Big Turnout for Indianapolis Libraries 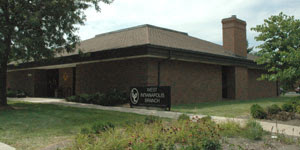 West Indianapolis Branch Library
One of 6 branches being considered for closure
Link to May 13 Indianapolis Star article, "Residents turn out again to support libraries. Another crowd urges board to avoid closures".

Excerpt: Residents turned out in force Wednesday for the second time this week to express support for the library system and opposition to a proposal to close six local branches.

Among them was Dorothy Tompkins, who pointed out that she was concerned although no libraries in her Southside neighborhood were on the list for possible closure. Most are surrounded by low-income neighborhoods.

"To me, this is taking away from the people who need it most," she said. "There are many alternatives."