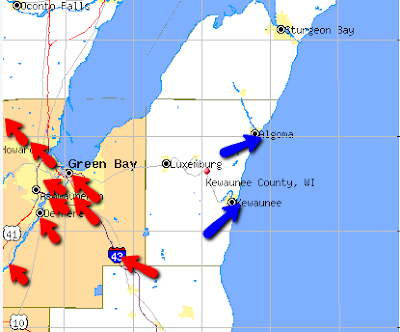 Brown County Public Library bills Kewaunee County for $68,404, as provided for in Act 420, whose sponsors included 8 Republican and 6 Democratic legislators.

This bipartisan support makes the opening of paragraph three seem a bit disingenuous, especially in these increasingly fierce partisan times.

Under legislation signed into law by former Gov. Jim Doyle in June 2006...

How many readers of  the article would flunk a test based on this information?

It's also interesting to note that the Assembly District of one of the bill's supporters, Garry Bies (R-Sister Bay), included almost all of Kewaunee County in 2006.   (As a result of the latest legislative redistricting plan, he now represents the entire county.)

Excerpt:   A news release from County Administrator Ed Dorner suggests that to reduce the reimbursements demands to other counties and the resulting property tax implications, Kewaunee County residents could begin to modify their habits and use local libraries.

The full-service Algoma and Kewaunee public libraries currently are jointly funded by the two respective cities and the county government. Kewaunee County residents also can request library items from the InfoSoup.org catalog and have them delivered to the Luxemburg Library Station at the Baylake Bank.

“So, Kewaunee County residents are already paying for library services through their property taxes and are urged to utilize their local libraries to avoid any additional costs such as the Brown and Manitowoc County charges,” Dorner said. 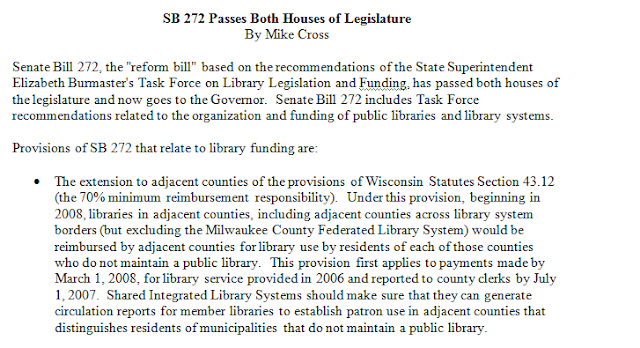