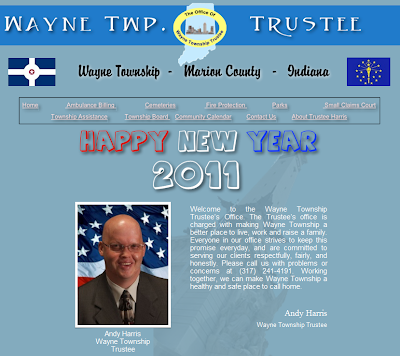 Not so happy for some anymore.
Link to January7 Indianapolis Star article, "Done deal for township libraries comes undone".

Excerpt: Wayne Township's proposal to pay to restore longer hours at four nearby library branches, which seemed like a done deal, is going back to the drawing board.

New Wayne Township Trustee Andy Harris' decision this week not to release about $200,000 in surplus funds for that purpose means the proposal will have to be reviewed again by the Township Board at its Feb. 10 meeting, even though it had approved the deal last month.

Also, the Indianapolis-Marion County Public Library board is planning to re-examine the situation to decide what they might do if they do not get the money that had been offered by David Baird, the former trustee.

"Our board had approved (the interlocal agreement), and their board had as well," said Laura Bramble, the library's chief executive officer, on Thursday. "We need to talk things out."

The Wayne Township Board voted 6-1 on Dec. 9 to approve the interlocal agreement to make the payment, out of surplus funds, to help restore reduced hours at the Wayne, Eagle, Haughville and West Indianapolis branches, which are popular with township residents. Operating hours and some staff for those branches and others systemwide were cut back in October to help balance the library system's budget.


Naturally, I now have this song running through my head.